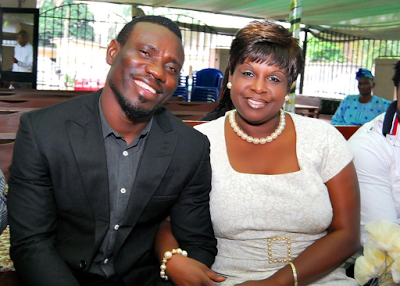 My Nigerian Husband Married Me To Get Green Card, American Woman Threatens To Report Him To Donald Trump

A US-based woman, Deborah Hendrickson is currently spitting fire on her ex-Nigerian Husband, Mr Inyang Obaten Ettah popularly called Tony Ettah for using her to get his American Green card and dumping her after getting into the United States.

Miss Hendrickson who has since filed an online marriage fraud case against Tony vowed to report him to Donald Trump once he takes office on the 20th of January 2017.

Here is her story:

“I don’t know where to start . . . I guess I’ll start with meeting Inyang Obaten Ettah, AKA Tony Ettah back in June 2010, we met through a friend of mine named, Charles. I’ve been visiting Nigeria since 2008, had an NGO there (Open Arms International) that never really got started, I know lots of people in Nigeria, Rich & Poor. I thought I was savvy when it came to the Romance Scammers, the 419ers, but, I was not prepared for how Inyang Obaten Ettah PLAYED ME, yes, I did inquire about Inyang via Charles, Charles vouched for Inyang’s authenticity (so HE THOUGHT) because Charles knew Inyang for 10 years (at that time – June 2010), there is where it began. 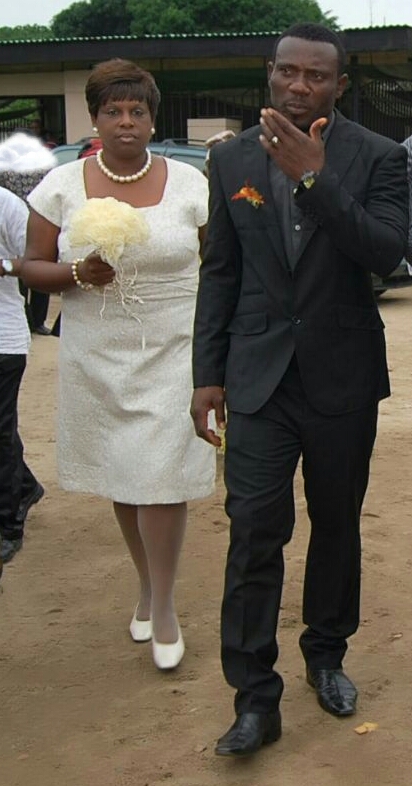 As Inyang and I began conversing, we discussed the difference in Age and the fact that I could not have any children, Inyang response was “it doesn’t matter because God said you are my Wife and I had made up in my mind that however God sent my wife, that is how I would ACCEPT her.”

He shared with me how many women in his church (Faith Tabernacle AKA Winners, David Oyedepo is Pastor) cannot have children, and some are even older than their husbands, but, they still married and are still married today (was referring up to that moment he made that statement). He even shared how his Auntie is in the exact situation (no Child(ren), yet she and her husband are STILL TOGETHER (at that time August 2010).

Time went on, Inyang then asked that I come to Nigeria to visit him, by that time he had CONVINCED me that he was AUTHENTIC and SINCERE – HE WASN’T. 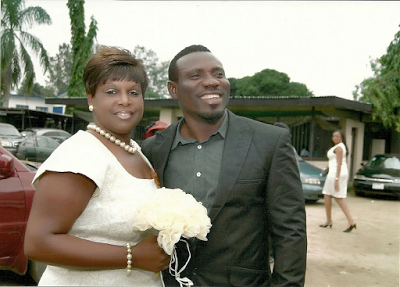 Anyway, I visited Inyang December 2010 (6 months after officially meeting). I was in Nigeria for 21 days, the entire time Inyang was the Perfect Host, he took me everywhere, introduced me to EVERYONE, family, friends, enemies, church associates, he even took me to church at Winners’ Chapel, Canaan Land, Ota Nigeria; Inyang was so active at Winners, he volunteered as Security (Bus & Church), he pretty much, so I THOUGHT lived in church, always talking about God (to me), he told me how he attended Pre-Marital classes at Winners because he wanted to Prepare to be an EXCELLENT HUSBAND to ME, he had me FOOLED, he was the World’s Greatest Pretender. 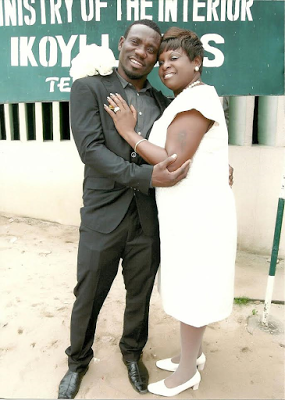 While in Nigeria Inyang proposed to me (December 21, 2010) during my Launch Party of Royal Entertainment Nigeria, I accepted his Proposal because I was convinced he was AUTHENTIC! He did not perform in the typical way that of a Romance Scammer or Yahoo Boi, as stated, he introduced me to EVERYONE, took me EVERYWHERE, etc. After the proposal, eight months later I returned to Nigeria and we were married 8 months later (August 12, 2011). What I thought that was going to be a Marriage, turned out to be MARRIAGE FRAUD!

I submitted Inyang’s Immigration paperwork to USCIS December 12, 2011, the first process was Approved May 2012, his Interview in Lagos was October 30, 2012 and his Visa was issued, the entire process from submission to Approval was 10 months, Inyang even used that quick process to say “the Lord Caused it to happen because it is HIS WILL because I’m his Wife.” LIAR! 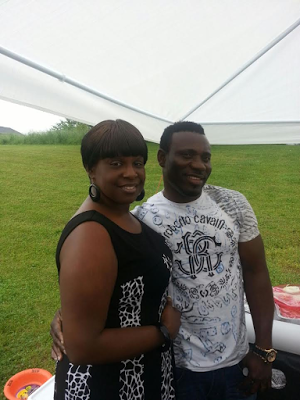 Inyang arrived in the U.S. November 21, 2012 and that’s when HE CHANGED – IMMEDIATELY! He was no longer the loving speaking, affectionate man I visited December 2012, his excuse was “he’s in a new place, give him time to adjust.” In the meanwhile I did my part as his wife. I later learned that Inyang never attended school in Nigeria when I took him to our local college (Danville Community College) to enroll, I was upset because Inyang TOLD ME he was college educated (in Nigeria), Education means a lot to me and I only aligned myself with college educated men, so, he could not enroll. he was advised to enroll in the Adult Education program, which he did, but was unable to do the work so he stopped attending. 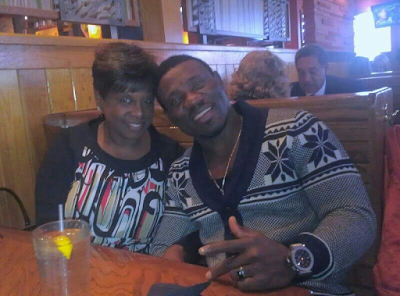 He applied for a job at a Company name EBI in Danville, VA (June 6, 2013) and was terminated (July 4, 2013) due to violation of company code by using profane language and misconduct, thereafter Inyang obtained a job at Ebay through Adecco a Temporary Employment Agency, he didn’t keep that job and was released approximately 4 weeks later (those dates elude me). Thereafter Inyang could not find employment in Danville, VA, it was a strain on the marriage. 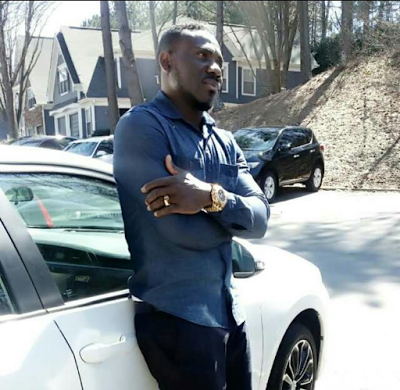 By April 2014 a friend of mine, Amos Ajo conference with Inyang and I to discuss Inyang moving to Atlanta, Georgia to work for him, the plan was for Inyang to move, get established, and I to follow no less than 6 months later – that NEVER HAPPENED! Inyang officially moved to Atlanta April 14, 2014, and Mr. Ajo did as promised, gave Inyang a job, Inyang and I talked everyday, he visited me periodically in Danville, VA; when I visited Inyang in Atlanta, he was always too busy to be with me, always said “he was working,” causing my trip to be wasted. 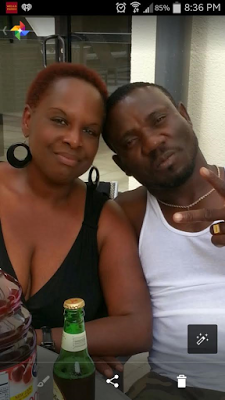 As time went on I noticed I was not hearing from Inyang, his excuse was always “he’s working,” yet he NEVER SENT ANY MONEY TO ME FOR the HOUSEHOLD in Danville, his excuse was “he had to pay for expenses where he was staying,” Mr. Ajo arranged temporary lodging for Inyang at 3502 Adkins Road, Atlanta, GA 30331 where he shared space with Mr. Gabriel Owolabi, a friend of Mr. Ajo.

By September 2014 Inyang did a surprise visited, I realized AFTERWARD that it was because the I-751-Petition to Remove Conditions on Residence Arrived, Inyang gathered all documents, and the form was Signed by me. I remained consumed with the preparation of opening my Christian Venue, Debs Gospel Cafe in Danville, VA, which opened November 2014. Inyang did another surprised visit for Thanksgiving 2014.

Thereafter it went back to him not calling. I visited Inyang in Atlanta, GA March 14, 2015 after the last seeing him since November 2014, that visit did not turn out to be good, Inyang complained that I could not stay with him at 3502 Adkins Road, Atlanta, GA 30331 because there “was no place for me to sleep,” so, I rented a Motel at the Super 8 in Stockbridge, GA, Inyang spent 1 night with me then left me at the hotel, not hearing from him again, he said he had to “go home to wash clothes.” I left Georgia devastated!

My daughter married March 24, 2015, to appease me from his doing me wrong a week later he attended her wedding, he was very cold, everyone around noticed his negative attitude towards me and quickly voices their opinion. March 26, 2015 was the LAST TIME I SAW INYANG. Inyang kept in touch, each time asking me “did his Permanent Green Card arrive,” he said he needed it because his job was in jeopardy and now that his finances was getting better better, he needed to keep his job at United Distributors, Inc. so he can begin sending me money – EVENTUALLY, HE NEVER SENT A DIME!

Finally, May 1, 2015 his Permanent Resident Card arrived, I mailed it to him because he expressed the urgency of it to show his Employer.

Once Inyang received his Permanent Resident card, he BLOCKED ME from ALL Social Network, MOVED to 1121 Ridgebrook Trail, Duluth, GA 30096, and changed his Job (unknown to me now).

Because Inyang refused to give me the necessary job information (while at United Distributors, Inc.) I was unable to apply and received Healthcare, Inyang filed his 2014 Income Tax but I have no clue under what Status, he did tell me that he filed SINGLE for 2015, and we were still married. Inyang changed his Driver’s License from Virgina #T60274200 to Georgia Driver’s License 059553398, he then moved his phone 434.203.5226 from my AT&T Family Plan to his own.

Inyang has severed ALL TIES WITH ME, as soon as he RECEIVED HIS PERMANENT RESIDENT CARD, to me, showing MARRIAGE FRAUD, IF he was serious about our Marriage, we would still be together.

Inyang has told many lies on me, saying, I threw water in his face, hit him, etc., I KNOW his Nigerian friends put him up to saying that, because IF I’d done those things, that’s considered ABUSE and he could have called Danville Local Police and file charges against me, but, IT NEVER HAPPENED. He must make me look like the bad guy when all I ever did was love him.

His plan was for us to REMAIN married so he can file for Citizenship in 5 years, because by now I figured out he USED ME for MARRIAGE FRAUD, he knew I would not submit the necessary paperwork for citizenship, he told me he could still do it in 5 years and that I could not STOP HIM FROM BECOMING A CITIZEN.

Though it’s MY WORD AGAINST HIS, all I have is HIS ACTIONS, He ADMITTED TO ME THAT he USED ME, and that I CAUSED IT BECAUSE I KEPT TELLING HIM THAT I SENSE HE WAS USING ME AND MY “WORDS” CAUSED IT TO HAPPEN (Him using me).

When Inyang made that statement I immediately filed (online) a Fraud Case.

I divorced Inyang August 2016, he gladly signed the Papers because he has a Fiancee, who he’s probably married to by now, offering him the opportunity to now file for citizenship.

I have been told that USCIS WILL DO NOTHING, because Inyang has not committed a Crime, YES HE HAS, He COMMITTED MARRIAGE FRAUD! That’s a Federal Crime. I’ve since learned (by people who know him) that he has a Shipping Company, he ships cars to Nigeria, and he has a Clothing Line Winners Clothes, he makes his money and sends it back to Nigeria, Inyang once told me that America is the Land of Opportunity and how he WILL RAPE this Country of their dollars and take advantage of All Opportunities, and he’s doing it.

I am a FIGHTER, I know of 15 Women who has Married Nigerian men and the men used them for Green Card Purposes and they “think” nothing can be done, I want to show them that, YES, SOMETHING CAN BE DONE! YES! they can be DEPORTED for Immigration Marriage Fraud.

I will sound the Alarm, Once Trump is in Office I will contact him and tell him my Story, I’m almost sure I will get RESULTS! Inyang should not have played with my life, I am a Good, Christian Woman Who Believes in Doing Right – all The Time.

I trust that the Lord WILL GIVE ME JUSTICE by the Fraud Division recognizing that Inyang Obaten Ettah MARRIED ME FOR IMMIGRATION MARRIAGE FRAUD.

Continue Reading
You may also like...
Related Topics:green card, husband, nigerian, us, woman