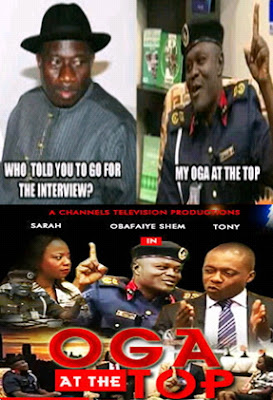 Few days ago, the Commandant of the Lagos chapter of the Nigerian Civil Defence Corps cracked the funniest jokes of 2013 after he forgot the name of his boss and the organization’s website address.

Embarrassing, humiliating and downright shameful — the two-minute scenario Nigerians and the whole world watched on live TV when the Lagos State Commandant of the Nigerian Security and Civil Defence Corp (NSCDC) Obafaiye Shem could not mention the organizations official website.

Speaking as a guest on Channels Television’s breakfast programme, Sunrise Daily,Shem when asked what the website was simply said ‘www.nscdc.’
FYI the correct url to the NSCDC is ‘www.nscdc.gov.ng’. 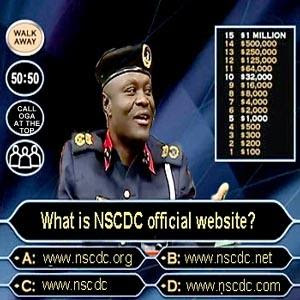 Asked to mention the NSCDC’s web address, Mr Shem said “I cannot categorically tell you one now.” Probed further to name the organisation’s website, the commandant said the address is: www.nscdc.

A Channels Television’s reporter checked the web address and noticed that it was incorrect. Further search on the internet showed that the correct web address for the Civil Defence Corp is www.nscdc.gov.ng

My Oga At The Top Video

Below is a report from Sahara Reporter on it…

The creative humour of the young Nigerian is on rampage with the joke now interpreted with several images courtesy of Photoshop splashed all over Facebook, Twitter and BBM.

While we may be having a good laugh over my oga at the top at the moment, the reality behind this public show of shame surpasses the humour by far.

Before we even go any further, has anyone realised that many top politicians, CEOs, and men of the Armed Forces these days can’t grant interviews without the exercise turning into a media gaffe? However you choose to look at it, this problem is a national crisis, in my opinion, especially since even our president is guilty in this regard, anyone in doubt please watch the Amanpour interview again.

My concern though is what our definition Leadership has become in the Nigeria. Our definition is simple: My ‘Oga at the top’.

What we have adopted as a nation, intentionally or otherwise, is the ‘Great man theory’ of leadership. The theory states that the leader is the great man we all answer to and he can do no wrong. This theory is perhaps why our country is the way it is.

The ‘oga at the top’ is the one who calls the shots, no one else. Every decision is taken solely by him, delegation is a foreign word. Followership in Nigeria is thus described as an uncompromising resolve to be loyal to a leader in any circumstance, following blindly.

Indeed promotion in the Nigerian Civil Service is hugely dependent on your loyalty to ‘the oga at the top’ initiative does not really count. If a follower shows any hint of initiative, he may be considered ‘too wise’. From that day forward, the Oga at the top would likely label him an enemy who is after his job.

So when the Lagos State Commandant of the Nigerian Security and Civil Defence Corp (NSCDC) cannot give the website of this organization correctly, don’t be surprised. Complacency is at work, the ‘great man’ doesn’t need to be at the top of his game, as he is now an oga at the top, even though he has an Oga at the top, who may likely not know the address himself, as we speak.

I personally believe that Leadership is communication, collaboration and continuity. However the leadership structure in the Nigerian setting lacks all three. If the leadership of the NSCDC take communication seriously, the web address would be at the commandant’s fingertips.

The Oga at the top mentality can even be found in religious circles. The religious leader is seen as an anointed man who is superior to others because of his anointing. It becomes a problem to address James by his first name, now he is Pastor James and if he has founded many parishes he is now Daddy.

This ‘man of God’ replaces God for several people and they take what he says wholeheartedly without embarking on a research on their own. This is why fake churches defraud members and fake prophets sleep with female members, if you are wondering what charm is at work, it is the Great-man theory of leadership.

“Our Pastor, the ‘Oga at the top’ said we should do it. What choice do we have?” they would say. You then wonder if these people consult their bibles at all, to check what they are being told.

The father at home is the ‘Oga at the top’ who is out to rule his family with a high-hand, punishing at will without taking time to explain what wrong the children did. He enjoys how he is feared by even his wife, confusing fear for respect, and in the end the children grow into dysfunctional adults eventually repeating the cycle which their parents began.

Please don’t get me wrong, leaders deserve a whole lot of respect, but leadership does not make one man superior over another. Leadership is collaboration and followers play a huge role in the success of any team.

In Nigeria, now is the time to redefine leadership, the ‘oga at the top’ great-man ideology needs to die fast for this nation to move forward.
Some of this ideology is rooted in our tradition with strange beliefs, for example, that ‘it is wrong to correct an elder’ or that; ‘old people don’t lie’. In certain contexts, this ideology applied can work well, but in practice Nigeria must move beyond this belief, a younger person can caution an older person with respect and yes old people do lie sometimes!

Leaders and potential leaders must have enough self-esteem to separate the position they occupy from who they are. A leader should be humble enough to admit ignorance, and where a follower bails the team out of a problem, a leader should give credit to that person.

Can you imagine what would have happened, had Obafaiye Shem simply said: “I can’t recall right now what the website is, but once you get on Google and search for us, you won’t miss it.”?

This ‘Oga at the top’ mentality must end fast!