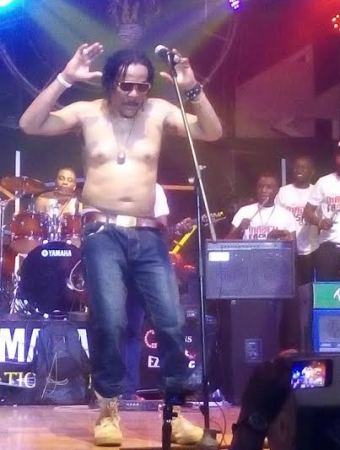 ….So, we have all been happy for Nigerian Reggae legend, Majek Fashek after returning from many weeks of rehabilitation following his battle with drugs and alcohol addictions.

Thinking back to the heartbreaking situation the brilliant musician was in
months back before respite came his way, I will never wish my number one enemy such.

Thanks to billionaire Ayiri Emami who is believed to have single-handedly taken it upon himself to foot the bill of whatever it took to get the rain-maker back to sanity, even when all his so called friends initially shied from him.

Of course, many thanks also to the gentlemen of the press, especially Joseph Edgar who wrote that heartfelt article on his encounter with Majek Fashek who was then begging for ‘Ogogoro’ at Fadeyi.

However, the joy we are all currently experiencing over his rehabilitation may soon be cut short if Majek Fashek is not well guided by those close to him who are supposed to guard him jealously. 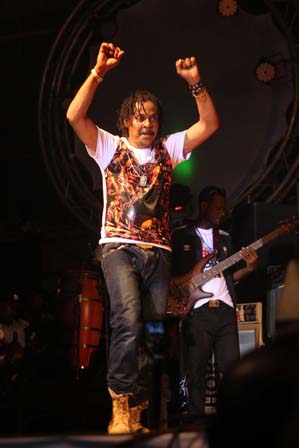 Majek Fashek had his come-back performance on Thursday at Felabration 2015 and the atmosphere was simply nostalgic!

I was held spell bound as he dishes some of his popular songs such as “Africa’s Unity”, “Majek Fashek In New York”, “Send Down The Rain” and a few others that gave me serious goose bumps and almost moved me to tears.

Chai, addiction na bastard! I thought aloud! It’s obvious the rain-maker still has his musical charms and I just couldn’t help but imagine the huge talent that has all this years wasted away under the shackles of drug and alcohol addiction.

With the performance I saw that night, I can proudly say that the rain-maker is back; but for crying out loud, why in the whole world would someone think of bringing Majek Fashek who is fresh out of the rehab to hang around and perform in a place like Fela’s shrine which reeks of all the appearance of almost everything that landed him in the rehab in the first place?

It is common knowledge that addicts who just left treatment facilities are always advised to steer clear of environments and association that can trigger their cravings.

A lot of time in rehab is focused on preparing people for the move back home–a transition that can be a perilous one if the client is not careful because the learning is far from over; the toughest challenges lie ahead of them.

All the conditions that supported substance abuse may still be there, and the individual needs to be ready to face these.

Staying away from alcohol or drugs while in rehab is made as easy as possible only because the client is protected from temptation and the whole focus of the environment is on helping them beat their addiction.

However, going home means no longer having such favorable conditions to promote abstinence and any mistake to go back to the former lifestyle can end the person in a worse state than he or she was before checking in into the treatment facility.

Therefore, when the thick smoke of ‘Mary Jane’ that danced all over the air inside the African shrine that night at every sound of Majek Fashek forced me to leave the venue immediately after his performance, my thoughts were with him throughout my journey back home.

“They better get him out of that premises already or he will end up trying some wraps tonight,” I thought to myself. And that’s if they didn’t actually offer him some that night, aside from the mass of the smoke from the air that must have saturated his system as he performed on that stage.

And you know what the doctors warn about second-hand smoking being worse than even the actual smoking!

I was like gosh! How can people be so careless with this man after all he has been through?

You wouldn’t ignite a fire at a fuel station, so why take Majek Fashek to a place like the New Afrikan Shrine? Atleast not at this early stage of his post-rehabitation.

Here is deeply hoping that Majek Fashek’s handlers will start being extremely careful and cautious henceforth so that (God forbid) they don’t help him back to the rehab again..and that’s if an Ayiri comes to his rescue this time around.

We know how long it took for someone to finally decide to do something about his plight!