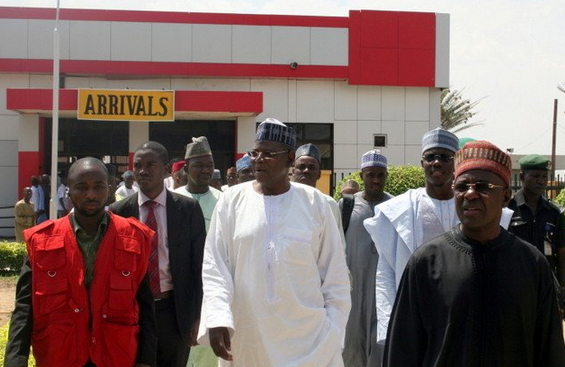 Ex-Jigawa State Governor Lamido and his two sons (Aminu and Mustapha) were yesterday relocated from Kano to Kuje Prisons in Abuja ahead of the hearing of their application for bail by a vacation judge.

They were allegedly kept in the same building block with some Boko Haram suspects.
But their relocation was greeted with excitement as inmates jubilated in anticipation of free Ramadan meals.

The three suspects are standing trial with Wada Abubakar for a 208-count charge of abuse of public trust and N1.351billion bribery by contractors.
Although they pleaded not guilty last Thursday, they were remanded in prison custody by Justice Evelyn Anyadike.

Investigation showed that Lamido and his sons were brought to Kuje Prisons at 1pm yesterday, after spending a few days in Kano Prisons.

It was gathered that although the suspects would have been moved to a separate detention facility, the order of Justice Anyadike had to be complied with.

It was learnt that the order was explicit that they should be remanded in a prison custody.
A reliable source said: “Upon arrival, they were formally registered as inmates, even though they are high-profile suspects.

“The fear was, however, temporary as inmates became excited in anticipation that the former governor would assist them to solve some problems.
“Some of the inmates asked the governor and his sons to provide them better meals to break their Ramadan fast yesterday.
“The governor and his children were later seen making arrangements for their own feeding outside the prison rations.”

“Were it not for the order of the court that the suspects be kept in prison, they would have been relocated to another facility.
“This is why they will be in Kuje Prisons until their application for bail is granted. I think the EFCC wants them to observe Sallah at home.”

Findings, however, confirmed that the ex-governor and his children were relocated to Abuja ahead of their arraignment before a vacation judge of the Federal High Court, Abuja for bail.

A source in the Economic and Financial Crimes Commission (EFCC) said:

“A vacation judge is expected to hear the bail application of the suspects any time this week.
“So, they have to relocate to Abuja to enable a judge to consider their request for bail. I know that they have been moved to Abuja, but I cannot tell you their whereabouts.”