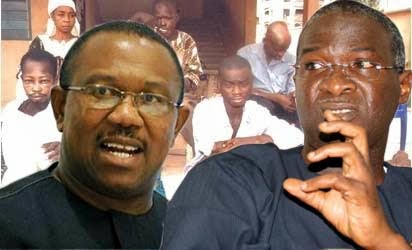 The Lagos State Government says it is not moved by the N1 billion suit filed against it by seven of the Igbo destitute relocated to Onitsha, Anambra State, southeast Nigeria, in July.

Seven of the destitute, namely, Joseph Aniebonam, Osondu Mbuto, Osondu Agwu, Nnenna Ogbonna, Emily Okoroariri, Friday Ndukwe and Onyeka Ugwu, sued on behalf of others, the Attorney-General of Lagos State and the Commissioner of Police and Lagos State Government to the tune of N1 billion.

Responding to the suit, Lagos State Attorney General and Commissioner for Justice, Ade Ipaye said the government was not moved by the N1 billion suit as it would appropriately respond to the challenge.

Ipaye said the state government had been served the court papers and government was ready to meet them in court.

He stated that the suit could be politically motivated but that government was going to respond to it appropriately.

“We are not moved by the N1 billion suit. The suilt could be politically motivated or not. We are going to respond to it as we have been served the court papers,” he said.

Interim Lagos State Publicity Secretary, All Progressives Congress, APC, Mr. Joe Igbokwe said: “we will meet them in court,” adding that the suit was politically motivated as those relocated could not have garnered the power to sue the government.

According to Igbokwe, those behind the suit should also sue Peter Obi for deporting several Igbo in his state to Ebonyi State in 2011, while accusing the Anambra State Government of being behind the suit because of the coming governorship election.

In the motion filed on behalf of the destitute, through their legal counsel, Barrister Ugo Ugwunnadi, an Onitsha-based legal practitioner, the applicants are praying the court to declare that they, as Nigerian citizens, are entitled to the enjoyment of their fundamental rights as provided for in Sections 34, 35, 36, 37, 40, 41 and 42 of the 1999 Constitution, as amended.

They applicants are also seeking a declaration of the court that their arrest and detention in various camps, Oshodi rehabilitation centre, police cells and prisons, within Lagos State for no offence known to law and without trial and conviction by a court of competent jurisdiction, amounted to a serious breach of their rights as provided for in the relevant sections of the constitution, saying such action was illegal, null, void and unlawful.

The victims also sought an order of the court to declare that their deportation from Lagos State of Nigeria to Anambra State of Nigeria on 24 July amounted to a gross violation of their rights and a breach of the provisions of the 1999 Constitution, as amended.

They noted that the court should mandate the first respondent to re-absorb and accommodate the applicants within Lagos State of Nigeria since they are Nigerian citizens and are entitled to reside in any part of Nigeria, including Lagos State.

The applicants equally sought a perpetual injunction restraining the respondents, their agents, privies, subordinates, workers and officers, howsoever called, from their further deportation or refusing them free entry into Lagos and free exit therefrom, as well as an order mandating the respondents to tender a written apology to them by publishing the apology in the following newspapers: Thisday, Vanguard and Daily Sun continuously for 30 days, from the date of the first publication, for unlawful and gross violation of their constitutional rights.

They added that the issue for determination is whether the action of the respondents in arresting, detaining and their subsequent deportation from Lagos to Onitsha, Anambra State is justified in law, in view of the supreme provisions of the 1999 Constitution of Nigeria, adding that if the issue is resolved in the negative and against the respondents, the applicants are entitled to the reliefs sought.

The Lagos State Government had on 24 July, 2013 relocated at least 67 Igbo destitute to Onisha, Anambra State, an action that had generated serious controversy for several weeks.

Governor Babatunde Fashola has since apologised to the Igbo over his action, saying he had no strained relationship with the Igbo people.