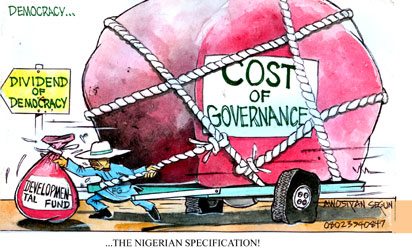 On Tuesday, Senate alleged that out of the N4.7 trillion budget estimate submitted last year to the National Assembly by President Goodluck Jonathan for consideration and subsequent passage, some government Ministries, Departments and Agencies, MDAS secretly smuggled in over N1trillion projects into it. This came just as the President has requested for Senate approval to borrow $7.9billion from the World Bank and four other multilateral development institutions. naijagists.com

According to the Senate, over 40 per cent of projects to be executed were not captured in the 2012 budget estimate indicating that the budget may have been doctored. Budget padding and corruption has led to rising poverty in the country with over 112 million Nigerians said to be under the poverty line.

Early in January, the federal government increased pump price of fuel from N65 to N140 a litre in a bid to finance its subsidy reinvestment and empowerment programme. The price was later adjusted downward to N97 per litre after a long drawn battle between labour, civil society groups and government which paralysed the economy for about two weeks.

Also yesterday, President Goodluck Jonathan asked the Senate to give approval for Nigeria to borrow ($7.905 billion) N1.264 trillion from World Bank and four other foreign banks to enable him fund the transformation programme of the Federal Government in the next three years.  The amount when borrowed will increase the nation’s external debt from the present figure of $5.67billion or just 2.5 per cent of estimated GDP to $13.575 billion by 2015.

Nigeria’s external debt, which stood at $32 billion in 2005 before the exit from the Paris club of creditors in 2006, dropped to $5.67 billion in 2011. The current figure of $5.67 billion includes the external borrowings of state governments, which are necessarily guaranteed by the federal government and representes $2.17billion of the total. Ratings agencies prefer to adjust their definition of public external indebtedness for official reserves.

Nigeria at the moment enjoys a net creditor status at end-December by virtue of its reserves of $32.9billion. More than 80 per cent of the current outstanding external debt was contracted from the World Bank and other multilateral agencies on concessional terms.  The largest single commercial loan is the US$500m Eurobond (6.75% Jan 2021), on which the yield has narrowed to around 6.00 per cent. The view of the DMO, whose role is to implement the policy of the FGN, is that the issue was a one-off to establish a benchmark for parastatals and commercial entities.

However, President Jonathan in his letter to the Senate read by David Mark yesterday explained that the money will be used as part of government’s medium term plan to create employment and engender economic development within the country, even as the Senate assured that the Federal Government is not bankrupt.

The President in the letter stated that the Federal Government will draw the money from African Development Bank, Islamic Development Bank, Exim Bank of China and Indian lines credit, besides the World Bank.  He explained further that the borrowing plans cover a period of three years starting from 2012 to 2014 money with an expected plan to borrow $2.64 billion or N422.4 billion annually.

The letter reads, “I wish to inform you that a number of special initiatives were designed to put the economy back on track through growth and employment activities geared towards the implementation of the transformation agenda. In that regard, a number of projects have been designed to create employment opportunities with a view to growing the economy.

“The pipeline projects are at various stages of finalization. Therefore, I present herewith a total external pipeline borrowing in the amount of $7, 905, 690, 000 or $2.64 billion a year being a cumulative facilities offered by the World Bank, African Development Bank, Islamic Development Bank, Export-Import Bank of China and Indian lines of credit.

He explained the benefits of the borrowing plans to Senators saying, “The objectives of the projects conform to the Transformation agenda of our administration and cut across various sectors of the economy. The initiatives are meant to put the economy on track through growth and employment.”

Chairman, Senate Committee on Media and Publicity, Enyinnaya Abaribe, while responding to questions from journalists after plenary dismissed claims that the borrowing was necessitated by lack of money to fund critical sectors of the economy.

He said, “I do not think that has anything to do with Nigeria being broke.

I think they are requesting to borrow $7 billion for a specific projects and you will get the details of it when the debate on it gets to the floor of the Senate because definitely a request from the President coming to the chamber will be debated whether it will be accepted or not pending on the merit of the request.”

Speaking yesterday, Chairman, Senate Committee on Appropriation, Senator Ahmed Maccido, PDP, Sokoto Central, described what the Committee saw as substantial changes in the budget, adding that the 2012 budget which was currently before the National Assembly may have been doctored.

Maccido who noted that some government Ministries, Department and Agencies, MDAS secretly smuggled in over N1trillion projects into the N4.7trillion fiscal estimate, also alleged that the smuggled items may have pushed the 2012 fiscal estimate to about N5.7trillion, adding that the committee would subject the budget to what he termed a more thorough scrutiny to expunge all the unauthorized projects.

The Committee Chairman who noted that the projects were smuggled into the budget by the MDAS, vowed that the Committee would expunge all the unauthorized projects, adding, ‘’we at committee level would jettison them because they are not in the original budget.”

‘’The items so smuggled into the budget is over N1trillion. So we are right now comparing the budget as originally presented by the president and the version presented by the MDGS. Unless these projects are there in the originally budget, we are going to scrap them. It is no longer going to be business as usual.  ‘’These people are just smuggling in projects that are not in the budgets. And we are going to remove them.” (vanguard)

Continue Reading
You may also like...
Related Topics:budget, fraud, nigeria, one trillion naira