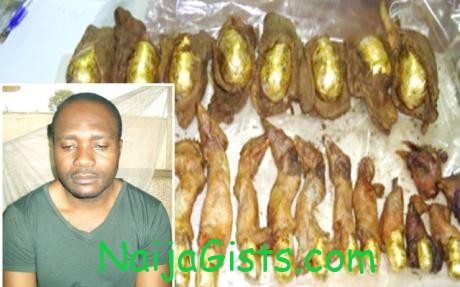 NDLEA officials over the weekend arrested a mechanic, Vincent Chegini Chinweuwa with 2.655kg of cocaine concealed inside roasted chicken. naijagists.com

According to the sun report, the arrest was made at Murtala Mohammed International Airport in Lagos state Nigeria during a clearance of passengers on a Turkish Airline flight from Brazil.

According to the officials, the seized cocaine worth more than 24 million Naira.

The suspect who is identified as Vincent Chegini Chinweuwa said he thought the drug will not be detected.

Here is what the suspect said:

“It took me three days to pack the cocaine inside the roasted chicken.
“I was confident that the drug will not be detected.
“I have been living in Brazil since 2006.
“Life has been stressful because I cannot even visit my wife in Nigeria due to lack of money.
“I wanted some money to start any business of my choice back home.
“Unfortunately, I was disappointed upon arrival in Lagos.”

NDLEA spokesman said the Imo-born suspect will be charged to court soon.