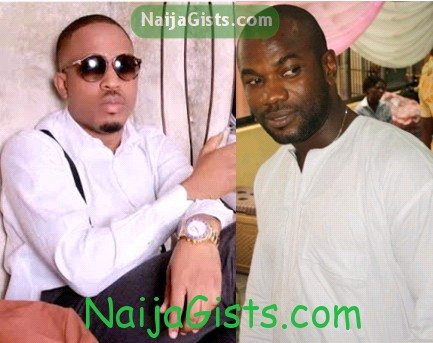 According to eyewitnesses of this unnecessary attack, we learnt Lewis Grant mistakenly stepped on Naeto C’s wife, Nicole‘s dress during the wedding reception of DJ Neptune that took place at the City Hall in Lagos Island on Saturday.

We learnt Naeto C disgraced himself when he descended so low to the level of hoodlums after he tore Lewis grant’s cloth in anger.

The mistake happened while Lewis was snapping the picture of Dj Neptune and his bride on Saturday at the aforementioned hall during the reception.

Naeto C who has lost the respect of many also slapped the blogger before calling military men (body guards) to further assault him in order to prove to him the kind of husband he is.

Everyone was barred from taking pictures while these lawless men joined forces to further assault the innocent blogger.

Thank God for the quick intervention of Lewis’s aunties who begged for his release.

Hear Lewis is his own words below:

I turned back to apologize and moved on to take more pictures, but before i knew it Naeto-c Pounced on me, and the glass of champagne which i held in my hand poured on his cloth, then he tore my shirt and slapped me , and because his wife is also a daughter to a Military Personnel , The military boys at the event also pounced on me, Then My aunty jumped on stage and shouted at the military boys to leave me alone that i was her son .The Rear admiral who also present also intervened quickly. ‘

Seriously this is uncalled for.

Is this how to show respect for one’s wife?