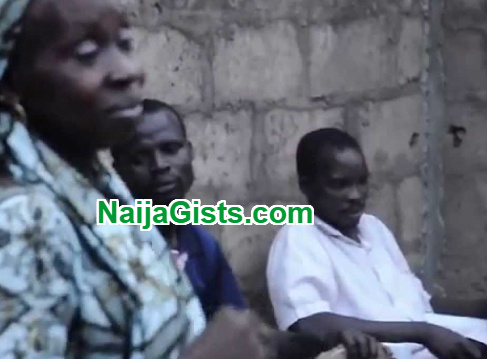 A native doctor’s wife, Mrs. Olaide Raheem, her children Sadik and Adam have been arrested by the police at Agbado Crossing Police Station for allegedly killing two friends with charms in Ogun State.

The incident occurred at No. 55, Owonikoko Street, Agbado Crossing, a suburb of Ogun State, Southwest Nigeria.

The two friends were Identified as Wasiu Balogun, 38 who is a panel beater and a native of Epe, Lagos State and Wale Aderinto, a welder and a native of Ilorin, Kwara State who resides at No. 8, Akin Afape Street, Agbado Crossing, Ogun State.

According to Mrs. Mutiyat, wife of Balogun, trouble started when Kabira Raheem who was eating outside the house was challenged playfully for not greeting.

She was said to have gone home to inform her mother that she was abused while her mother, Mrs. Raheem mobilized her children, armed them with charms and came out to fight.

“My husband and his friend who went out earlier just came back to meet the fight. They were separating the fight when one of her son (Mrs Raheem) used a knife laced with charm to stab my husband and instantly he fell down and died while their mother also used a fetish object to hit his friend and he too also died instantly.

“I have five kids, which include four girls and a boy. The last child, Aisha just clocked six months on the 3 September, 2016. I want the government to come to my aid,” lamented Mrs. Balogun.

Miracle: Doctors Reattach Man’s Pen*s Hours After Lover’s Husband Cut It Off In A Hotel
Photos: Baby Boy Bitten Over 12 Times By Another Child At Florida Daycare Center