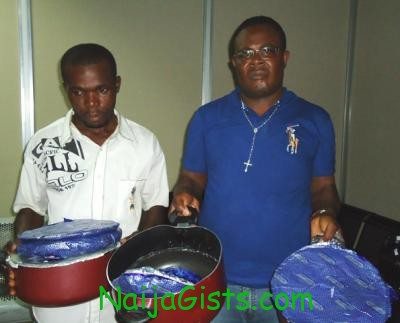 The suspected heroin was allegedly discovered inside cooking pots at the MMIA, Lagos

Officials of the National Drug Law Enforcement Agency (NDLEA) have apprehended three suspected members of a drug syndicate in connection with unlawful importation of 4.1kg of heroin from India.

The drug, which was intelligently hidden inside cooking pots, was discovered at the arrival hall of the Murtala Mohammed International Airport (MMIA) Lagos, during a routine search. It was imported by a suspected member of a drug cartel who was caught during the screening of passengers on Qatar Airline flight from Dubai.

According to the NDLEA Airport Commander, Hamza Umar, one of the suspects, Nwokeocha Chimezie, 43, who brought the drug from India en-route Dubai, was apprehended by NDLEA officials when the drug was discovered.

“Another suspect, Chidozie Alawoba, 30, that came to the airport to receive him, was also apprehended,” said Hamza. “Also, in a follow-up operation, Akeem Iyanda, 46, another suspected member of the syndicate believed to be the point man of the drug cell in Nigeria was also arrested.”

The Chief Executive of the agency, Ahmadu Giade, described the operation leading to the arrests of all suspects as very satisfactory. “This is a product of careful management of operational intelligence,” he said. “This is very satisfactory and inspiring. The man that brought the drug from India was arrested together with two other members of the cell in the country. Our target of arresting all persons connected to drug crime and bring them to book was achieved. More arrests are in the offing.”

Nwokeocha, an auto parts dealer in Onitsha, Anambra State, said he travelled to India on October 26, 2011, and left India with the drug to Dubai on November 11, 2011.  “I went to India for an eye surgery,” he said. “In the process, I met a friend who gave me the cooking pots. He told me that it was a gift for his sister in Nigeria that just put to birth.”

Alawoba, a deportee from Libya in 2009, who was asked to receive Bartholomew at the airport was later arrested. According to him, “while I was in Libya in 2007, one of my friends who live in India called me on phone that I should assist him. He asked me to receive the luggage from Bartholomew and give it to one Akeem. I do not know both men, I was only executing my briefs.”

Continue Reading
You may also like...
Related Topics:heroin, india, ndlea