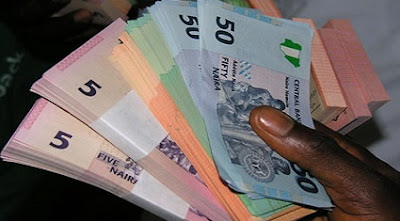 DSS & Police operatives have arrested four persons, including a woman, over an alleged illegal sale of Nigerian currency (Naira) in Lagos State.

The Police Public Relations Officer in the state, SP Chike Oti, disclosed this on Wednesday in Lagos.

Oti said the suspects were arrested at Ojuelegba and Lagos Island while selling new Naira notes.

He said that the Sting Operation was carried out in collaboration with officials of the Central Bank of Nigeria (CBN).

The spokesman stated that the suspects violated Sections 20 and 21 of the CBN Act that made selling or hawking of Naira notes an offence.

He said that the act of spraying Naira notes at occasions, soiling, writing, squeezing as well as hawking and selling it were also abuse of the Naira.

He emphasised that Naira is one of the symbols of national identity which must be treated with respect by Nigerians.

“Four suspects, comprising three men and one woman were arrested at Ojuelegba and Tinubu Square, Lagos Island, during a raid supervised by the Commissioner of Police in Lagos State.

“A total sum of N759, 200 consisting of various denominations was recovered from the suspects.

‘‘Investigations have already commenced on the matter to ascertain the source or otherwise of the new Naira notes.

“The Nigeria Police, DSS and CBN will continue this clamp down on the perpetrators of this offence which is punishable under the CBN Act 2007 to a jail term, not less than six months or fine not less than N50, 000,” Oti said.

Oti appealed to the public to desist from abusing the Naira.

Continue Reading
You may also like...
Related Topics:naira, new, notes