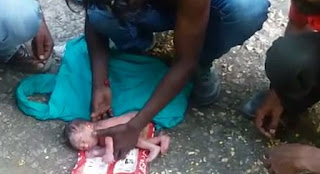 A young lady who dumped her baby boy besides a house in Yauri area of Kebbi yesterday evening has been arrested.

According to Kebbi Police, the new mother identified as 23-year-old Gambo Suleiman allegedly abandoned the baby boy beside a family house in Yauri around 5pm.

The innocent newborn was later rescued by residents who heard his cry.

He has been taken to the Kebbi Orphanage Home for proper medical care.

Kebbi State Police spokesman DSP Mustapha Suleiman who confirmed the arrest of the mother said she would be prosecuted after investigation.