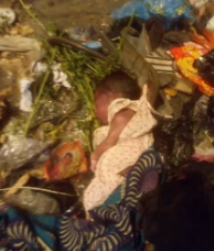 Some heartless humans who saw a single mother dumped her newborn baby girl on a refuse dump in Port Harcourt yesterday have allegedly abandoned the infant to die.

An eyewitness who identified herself as Nnenda said the baby was dropped at the wee hours if the night but was alive as at the time it was seen in the middle of refuse early Wednesday morning.

“We woke this morning to see this baby here. She was alive but the baby later died. We don’t know if it is a boy or girl child. We don’t know who abandoned the baby. Maybe it is cold that killed the child.“

The baby girl dropped at Mile 2 Diobu area of Port Harcourt yesterday died even as those who saw her alive refused to rescue her.

This is really sad. How can people watch an innocent baby to die like that… Why can’t they alert the appropriate authorities?.

Where is our sense of compassion in this country?.