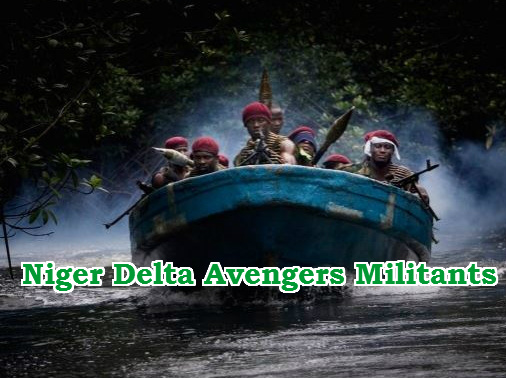 Another dreaded militant group who recently blew up oil pipelines in the Niger Delta Region has warned Chevron Plc not to repair the pipelines until its demands are met.

Niger Delta Avengers ordered Chevron and the Federal Government of Nigeria to provide villages and communities in Niger Delta region with hospitals, good roads, electricity, schools and portable water before carrying out the repair.

The group threatened to bomb Chevron base in Lekki Lagos if its demands are not met.

“From our investigation, Chevron Plc is about to carry out repair works at the valve platform that was blown up by us (Niger Delta Avengers). We made it clear that no repair works should be done until our demands are fully met.”

”They have a pact with the federal government to undermine the people of the region.
“When we blew up the Chevron Valve Platform it resulted in total blackout in the Escravos Tank farm for more than three hours. If we can do it just know that we are capable of bringing down your tank farms if you continue with repair works on the blown valve platform.

“Chevron and the Nigerian Government are pushing us to do that which is against our wish. Despite making it clear that we are not after innocent human lives but the way they are going, we will not rule out human casualties.

”Be informed that if we decided to strike, it is going to be bloody. And to the contracting firm going to do the repair works, we want you to know that your facilities and staff will be our first casualties.
”We want to warn Chevron that the heavy presence of military in the creeks will not stop us from carrying out our operations.

We are ready to destroy more pipeline. We will not only destroy pipeline, but will bring the fight to your tank farm and your headquarters in Lekki, Lagos,”.