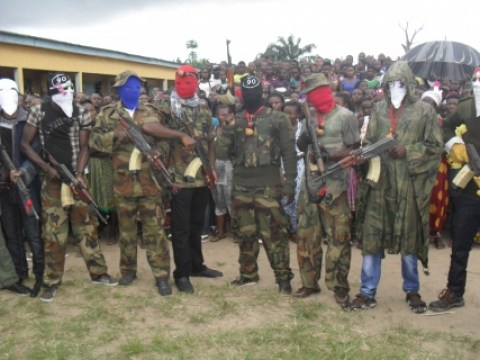 Hours after the General Officer Commanding (GOC) 2nd Division of the Nigerian Army, Ibadan, Major-General Kasimu Abdulkarim visited Asaba, the Delta State capital, and threw his weight behind the military exercise in the creek, the Niger Delta Greenland Justice Mandate has blown up another major oil installation in Urhobo axis.

The facility, a major trunk/delivery line that was blown up on Friday night, is being operated by Nigerian Petroleum Development Company in Udu Local Government Area of the state. The group also warned the oil firm not to embark on any repairs, pending when signals come from them..

The spokesperson of the group, Gen. Aldo Agbalaja, who claimed responsibility for the bombardment in a press statement tagged “Ours is not a Blind Campaign,” few minutes after the explosion, said, peace cannot be realised in an unjust environment.

“Like we said from the onset, the Niger Delta Greenland Justice Mandate is not just about causing calamity and delighting in chaos, rather a child of circumstance, born to correct an injustice that has brought upon us, from the time of our fathers.

“We are in this struggle, not to create any acrimony with our friends and brothers in the riverine axis, who are equal citizens of this over-sapped region, but to call the attention of the world to our peculiar experience; that we, as people of diverse tongues and orientation, have kept faith with both the Nigerian government and oil multinationals over the years, by being peaceful, patient and law abiding all through the years, but have in turn been abused and abandoned by these same supposed partners.

“They have all along taken our quietness and disposition for peace and choice for orderliness for granted. We have watched and seen that they only encourage lawlessness and violence”, the statement read. While the group maintained that its “quietness and disposition for peace” have since been used by the Federal Government to shortchange the people of the region, it has rearranged itself and chosen the line of action they (the Federal Government) knows how best to quickly respond to.

“Peace and order are not strangers to us, as a matter of fact, they are the way we have chosen for long and thus its difficult for us to revert to, only that they will not cheap this time; they have to be bought with mutual faith and doing right to our people and our lands”, the statement further explained. Listing its demands, the in clear terms urged the Federal Government, to in sincerity and forthrightness, call for an urgent and all encompassing meeting of genuine stakeholders of the core Niger Delta communities, especially those from oil producing communities.

“This”, according to the group would truly create a Niger Delta platform, where real issues of injustice will be discussed.

The oil multinationals must be part of this and the United Nations should serve as witness to this along side some very credible international NGOS.

“While the Niger Delta Greenland Justice Mandate is not opposed to the on going negotiations between the Federal Government, oil companies and the Ijaw elements of our region, we are not comfortable that this is going on with an impression that it is the whole of Niger Delta that is involved, we demand that the federal government call for a selection of very credible persons from all regions who are who understand the pains of our people and not some political criminals with names who are looking for breast pocket money.