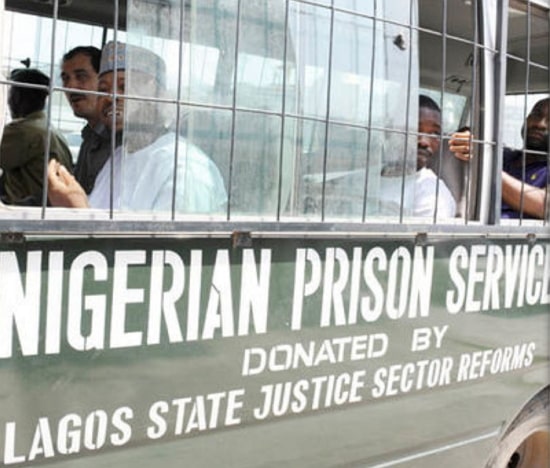 The tragic death of 5 inmates awaiting trial shouldn’t have happened. Worse still, it may happen again. About 140 inmates were said to be in the cell made for 35 inmates when the deaths occurred, highlighting the age-long problem of overcrowded prison cells.

A power surge was reportedly responsible for the electrocution of the five inmates on the 2nd of December 2019 . But there were personnel responsible for the safety of inmates, which explains why the Civil Defence, Correctional, and Immigration Services Board (CDCFIB) approved the suspension of seven senior officers of Nigerian Correctional Service (NCS) and a junior worker, pending the outcome of a probe by the board’s discipline and general purpose committee.

A report quoted a source as saying: “Actually, what happened was that… there was a power surge. The surge cut off an electric wire.

You know, Nigerian prisons use metal bunk beds. So, the inmates, who were close to the bunk beds, were the major casualties. The five deceased inmates were the closest to the bunk beds and that was why they did not survive it.

“If not for the medical workers in the prison, many more inmates would have died. The prison authorities called the power company and power was disconnected. The officers also offered first aid, which reduced the number of casualties.”

Seven other inmates involved in the incident are receiving treatment in hospital, according to a statement by the Nigerian Correctional Service (NCS) spokesman, who noted that the centre, built in 1955 for 800 inmates, had a population of 3,113, with 2,680 persons awaiting trial.

It isn’t enough that the NCS admitted that overcrowding at the centre contributed to the tragedy. It is no news that the country’s prisons, recently renamed correctional centres, are congested.

For instance, a 2017 study by a not-for-profit organisation, Citizens United for the Rehabilitation of Errants (CURE-NIGERIA), showed that 50, 427 or 67 per cent of the 74,508 prisoners in Nigeria, were awaiting trial.

This figure made Nigeria “the fifth country with the highest awaiting trial population in Africa, trailing Libya, DRC, Central African Republic and Benin Republic,” according to the organisation.

Studies have shown that excessive use of pre-trial detention and low investment in welfare spending are major causes of the prison overpopulation problem.

Also, it has been observed that when defendants are admitted to bail by a court, but are unable to satisfy the bail conditions, they are remanded in prison custody, thus swelling the population of those awaiting trial.

Challenges facing prosecution agencies and the judiciary are also to blame for prison congestion, and a situation where some of the inmates end up spending more time in prison custody than they would have spent if convicted.

Predictably, overcrowding has overstretched the prison facilities and personnel, creating a situation where inmates are exposed to the kind of tragedy that happened at the Ikoyi Medium Security Custodial Centre.

A legal action instituted by the Prisoners’ Rights Advocacy Initiative against the Nigerian Correctional Service reflects public reaction to the electrocution of the inmates. The group wants the court to order NCS to decongest the correctional centre and also review the cases of inmates awaiting trial.

There is no doubt that inmates, whether awaiting trial or not, deserve to be protected from such a disaster. There should be a thorough investigation to prevent a recurrence.