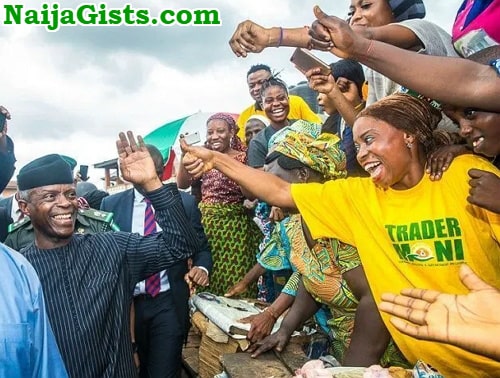 At first, it will seem rather strange and even wrong to call on a happy people to stop being happy and instead be angry, particularly in a country like Nigeria, where religion and faith are a regular substitute for self-help, and an excuse for inaction.

What is the point of happiness though if it is steeped in increasing levels of poverty and unfulfilled human rights and dignity?

The 2019 World Happiness Report, a landmark survey of the state of global happiness, produced by the United Nations’ Sustainable Development Solutions Network, with analytics from Gallup, ranked 156 countries by how happy their citizens perceive themselves to be.

The report placed Nigeria second in Africa and 85 in world happiness ranking. Normally, this would be a good development. In the case of Nigeria, and relating to the point of this article, this isn’t necessarily so.

It could be considered has evidence of a citizenry that has become desensitized to good governance and foregone their right to political, social and economic justice.

If it is, then it is a disheartening sign of complacency, because at the same time as people are apparently getting happier in Nigeria, according to statistics from Action Aid, 68% of the population live below the poverty line, with some 44.2% of Nigerians living in extreme poverty and, shockingly, the poor in Nigeria pay more in taxes than multinational oil and energy companies.

Nigeria’s domestic investment in health currently stands at just 0.9% of GDP. In practical terms, this means that there are chronic shortages of medical supplies and many hospitals are very poorly equipped; there is widespread misdiagnosis and late diagnosis; hygiene conditions in many hospitals are rather problematic, especially outside the large cities; it is estimated that there are four doctors for every 10,000 people in Nigeria.

Lack of standard medical infrastructure, facilities and general investment in healthcare in the country has seen the medical sector experience one of – if not the most – severe case of ‘brain drain’ from the country, as highly-trained experts regularly depart the country to pursue their profession in countries with better infrastructure or higher wages.

All over the word we are witnessing political discontent and social unrest because citizens demand better from their leaders. In Nigeria, this hasn’t been the case at all.

It is understandable that over the years, Nigerians will have learnt to mask their pain through telling jokes and making light of the very source of their pain. In Nigeria we were fortunate that we didn’t have to experience the long and hard struggles for independence like many countries did, perhaps most notably seen in the anti-apartheid struggles of the 1970s and 1980s in South Africa.

As much of a blessing as this was, perhaps if we had to struggle for it, we will have imbibed the culture of people-power as a major agent for change.

These days however, even with the unprecedented global inter-connectivity and the several cases around the world of people achieving progressive change when they come together as one to demand for it, it is increasingly hard to tell if this light-hearted response to their avoidable pain continues to be a case of Nigerians perceiving themselves to be powerless, masking their pain, or just a case of becoming numb or even oblivious to the causes of such pain and their ability to tackle them.

While denial of rights has caused anger and reaction in many parts of the world and continue to do so, in Nigeria, many people would rather joke about the denial of our rights.

There is nothing funny about police extra-judicial killings that saw officers of the Nigerian police randomly shoot at innocent protesting students in Ekiti state and no one faced any consequences for it.

There is nothing funny about the lack of action against past and present corrupt public office holders who have siphoned billions of Naira from the country and continue to seek to rule it.

There’s nothing funny about successive governments’ failure to ensure security of lives and properties and the ongoing kidnapping rampage in major cities in Nigeria.

There’s nothing funny about the highly questionably claim that over N5 trillion ($31.45 billion) has been invested in the power sector since 1999, while the country continues to experience what many have called epileptic power supply, severely stunting the country’s capacity for sustained development.

There is nothing funny about a murderous terrorist organisation carrying out terrorist attacks while public officer holders, pretending to tackle the menace, divert millions of Naira of public funds for themselves and their cronies.

There is nothing funny about university graduates who can’t speak English coherently when it indicates a broken education system that needs urgent fixing.

These things have all been subject of joke telling in Nigeria when they should have resulted in widespread anger and reaction to demand better.

We laugh them off when these jokes pop into our social media feeds and then we swiftly move on, but there are people on the receiving end of the subject of every such jokes, who must then try, often unsuccessfully, to deal with their real-life consequences.

Laughter is good – very good for the heart, but in situations like the above, it only inadvertently leads to complacency and piling up of misery on the poorest Nigerians.

While a call to anger and collective reaction may at first seem like a depressing and ‘faithless’ thing to do, it is what can accelerate the realisation of fundamental economic and social rights for all Nigerians.

Many people across the globe are coming quickly to the realisation that there is great power in numbers. The only thing more powerful than a politician wielding power unsympathetically and/or unempathetically, is a citizenry standing up against them, together as one.

As Nigerians, we will only begin to see real change when we begin to demand it at all levels of government. We will however only be able to take a collective stand and demand for positive change if enough of us would come quickly to the realisation that some things have too much negative impact on people’s lives to become the focus of viral jokes.

Such things should lead us to anger and counter (but focused and lawful) reaction, not laughter and continued complacency. Enough really is enough!

About the author: Buraimoh, the founder of Diaspora Initiative for Nigeria’s Development (DiND), wrote from London