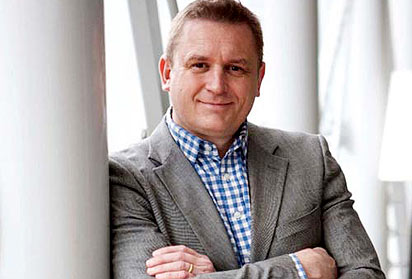 A former reporter at BBC, David Hayward recently travelled to Nigeria for media consultancy project. While in Nigeria, the ex-journalist captured his negative and positive impressions on the country and expressed it in an article he titled “Nigeria in the eyes of a Briton”

Read the article below:

Earlier this year, I was approached to do some media consultancy in Nigeria. I’d just left the BBC after 18 years, to set up my own business, so this seemed a great opportunity. I spoke to a number of friends and former colleagues. I’d heard many stories about Nigeria, seen the reports on Boko Haram and had my own impressions of sub Saharan Africa.

The advice fell into two camps:
a) Don’t go, you’ll get kidnapped or catch malaria. Either way, you’re going to die

b) Nigeria is a nightmare. When you arrive, you’ll be swamped by hustlers trying to rip you off, steal your luggage and all your money. If they don’t get you, the corrupt police officers and officials will.

I was mainly to be based in Asaba, the capital of the Delta State, one of, if not the biggest, oil producing states is Nigeria. In an attempt to be a bit more thorough with my research than asking a few old mates, I contacted the office of BBC Media Action in Abuja.

The fairly pragmatic response was : “We treat the Delta State as a hostile environment. It’s an oil producing area and there is a strong risk of kidnapping. However if you have armed security, this risk will be slightly reduced”. I took this to be reassuring and made sure an armed security clause was written into my contract. I spent some time talking to my wife Jo and children about the prospect of going to Nigeria.

Jo’s attitude was : “For God’s sake, this is exactly what you love doing. The more dangerous a place the better the stories. You’ll be able to show off and bore people senseless about roadblocks, men with guns and how brave you are”. Buoyed by this I accepted the work and prepared for Asaba. I got my visa, all the vaccinations I could fit into my arm and made sure I had a small mountain of malaria tablets.

I really didn’t know what to expect from Nigeria. It’s easy to fall into preconceptions that Africa is all about war, famine, corruption and poachers killing endangered animals.

I caught the overnight BA fli1 around the site to cater for a mass of cargo. About ten minutes drive away, just across the Niger Bridge, is the city of Onitsha. One of the busiest markets in Africa. You can buy almost anything there.

I was to travel in and out of the airport several times in the next five weeks. Each time something new was completed. The baggage carousel, lacking when we first flew in, was fully operational the next time. So were the check-in areas and the very plush departures hall.

The next morning was the first venture out. Yinka and I decided to go for a bit of a run. It seemed sensible to set off early because of the heat and to avoid the risk of being kidnapped or shot at. So at 6am we were off. About a minute into the jog we approached a group of somewhat hard looking men with very big guns. They were guarding the gates to our compound. This is not a sight I’m used to on my normal runs in rural Leicestershire, in the UK.

Anxious to appear as inconspicuous as possible I tried to sneak past, not drawing too much attention to myself, convinced I was about to be arrested. However quite the opposite. We were greeted with cheers of “Good morning sir, well done, how far?”.

Once I had composed myself from the shock, very nearly tripping over in a sweaty heap, we continued our circuits. Every time we passed someone we had the same greeting. It began to feel as though we had our own troupe of heavily armed cheerleaders. (Or should that be troop?)

This was quite an introduction to what, I began to realize, was one of the most friendly countries I have been to. This is a genuine friendliness. It is not a means to get to know you and rip you off.

The following few weeks continued to surprise me – and to make me feel very embarrassed about my initial preconceptions. I’ve been lucky enough to visit a whole range of places in the Delta State. The TV and radio stations need some work, but the staff are young, enthusiastic and very hard working. Warri, the oil centre, is a thriving hub that is only going to get bigger, with the construction of the largest business park in West Africa. The sign at our hotel was a bit disconcerting. It asked everyone carrying guns to make sure they weren’t loaded – which was nice.

The University Teaching Hospital in Oghara is as well equipped as any I have been to in the UK or the rest of Europe. There are state of the art CT and MRI scanners, a world class renal unit and 25 paediatric intensive care beds.

The journey to the hospital gave me the first opportunity to see a proper Nigerian village. This was far closer to what I had been expecting. The goats and cattle roaming the dusty roads, the food stalls cooking chicken, fish and corn over open fires. Dozens of bars with dodgy looking satellites, advertising the latest football matches live. When we slowed down, or stopped the car we were surrounded by two groups. The children pointing at me were shouting Oyibo, Oyibo (white man) and teenagers trying to sell anything from palm wine to cola nuts, to the latest mobile phones.

Now I can’t be sure, but I don’t think the iphone 5 I was offered for 5000 naira (about £20) was as genuine as it could be. All of this was done with great fun and humour. If you chose to, you could buy everything you needed from your car. If you didn’t, that was fine too.

Suicidal Okada
The transport system is far from perfect but all the roads we’ve driven on are absolutely fine. The most interesting experience was seeing the suicidal Okada motorcycle taxis in full force for the first time.

They have been banned in Delta State and replaced by three-wheel kekes. But this is certainly not the case in Onitsha. It is about a fifteen-minute journey from the centre of Asaba, but it could be on another planet.

You drive over the Niger Bridge, enter the neighbouring state and a different world. One where thousands of the small machines ferry people and any goods you can think of around. We saw one driver with four passengers, two adults and two children precariously balanced in front and behind him.

Oil barrels containing God knows what, weighing heavily on the clearly inadequate suspension. I was told someone had seen an Okada carrying a donkey, strapped to the driver as though he was giving it a piggy back. I don’t know if I believe this, but, from what I saw in Onitsha that day, I can’t rule it out.

The drivers are quite mad. We were there for about a minute before our car had its first near miss. We were to have many more in the next half an hour, with the rules of the road, like driving in the same direction on a dual carriageway, simply ignored.

The noise is deafening. As the Okadas rev their tiny engines, they sound like a swarm of very loud insects buzzing inside your head. You very soon begin to choke on the fumes of burning oil and petrol.

It was quite a relief to cross back over the bridge into the far more serene and calm home ground of Asaba. The welcome I have had everywhere is stunning. On one occasion I interviewed a senior state commissioner. It turned out it was his birthday. He kindly invited me to his party that evening. I didn’t really know anyone else going – so felt a little uncomfortable. No need. When I arrived he insisted I sit with him.

He made sure my glass was never empty and my plate constantly filled. I was introduced to everyone and made to feel an honored guest.

There was a downside to this. The comedian who anchored the programme took quite a shine to me….. “Ahhh give it up for the white man, where are you from”?
This was followed by ten minutes of him royally taking the **** out of me. I understood about one word in ten, but by the reaction of everyone else, it was obviously very amusing. So much for being inconspicuous.

Premier League
But the worst was still to come. People began standing up and paying tribute to the Commissioner. He is a very popular guy. Halfway through the speeches the comedian spotted me once again. “Does the white man want to speak”. I stood, said a few words and wished he would see his children’s children and his children’s children’s children. This appeared to be the toast de jour and went down very well. The evening ended with lots of photographs being taken and many new good friends.

The one thing you cannot escape in Nigeria is the love of the English Premier League. I have so far failed to meet another Leicester City fan, an obvious shame, but there are millions of diehard Manchester United, Arsenal and Chelsea supporters.

Watching the Liverpool v Man Utd game at the Asaba viewing centre, with thousands of people wearing the respective replica kits, was one hell of an experience, although my eardrums may take some time to recover. There is no doubting their passion. They may not have been to Old Trafford, The Emirates or Stamford Bridge, but the passion they exuded was clear. I’m not sure what ‘come on ref,’ or ‘what was that you idiot’ is in pidgin, but I heard it several times that day.

The viewing centre was created by the governor of Delta State, Dr Emmanuel Uduaghan. He is an Arsenal supporter. I met him once while playing tennis. For some reason he didn’t seem very impressed by my love of Leicester City. I simply don’t understand why.

Some Nigerians have a bad habit of seeing foreigners as gods when they spot them in Nigeria. Hmmm can you see the way this man floored the country.