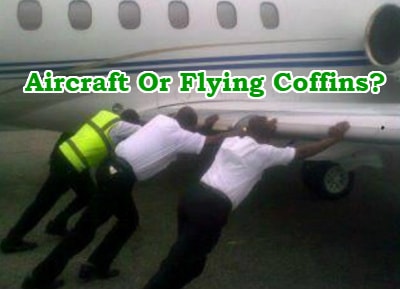 The symptoms are glaring. Nigeria is apparently sleep-walking into a dungeon. A fatal aviation mishap seems imminent. Label me not a pessimist but recent goings-on in the aviation sector offer no optimism. Heart-wrenching but true tales are emanating from our airports. Heart-wrenching tales of gross ineptitude, carelessness and unprofessionalism.

Over the years, we’ve configured the polity to absorb our self-inflicted woes without puking. That’s why you still hear gory goings-on in such a delicate sector. In 2018, the story remains the same. The operational competence of airlines is on the front-burner. Confidence in the sector has eroded alarmingly.

Cattle have been occupying runways, aircraft emergency exit door has fallen off; plane has landed in the bush after overshooting the runway. These incidents continue unabated even as airlines are hiking fares for passengers.

We are just three months into 2018, but no fewer than three airlines: DANA Air, Delta Airlines and Arik Air have been in the news. A DANA Aircraft had its emergency exit door fall off while landing at the Abuja airport on February 7. Dana Air crawled into the news again on February 20, when its aircraft overshot the runway of the Port Harcourt International Airport. The plane found itself in the bush, minutes later. Delta Airlines, on February 13, carrying over 200 passengers developed an engine problem about one hour after take-off from the Lagos Airport. On March 6, Arik Air took its turn “when smoke was detected in the cabin of its Dash 8 Q400 aircraft that was on flight W3 304 from Lagos to Accra. The discovery forced the pilot to declare an emergency, 81 nautical miles to the airport of disembarkation.”

Tell the powers that-be that all is not well, and they would quickly draw your attention to the fact that “Nigeria has retained its United States Federal Aviation Administration (USFAA) Category One safety certification for the third time.” Dear reader, it is not unpatriotic to posit that safety in Nigeria only exists on paper.

These problems did not just spring up overnight like mushrooms. 2017, the preceding year, was gorily familiar to what we are experiencing now. On April 18, 2017, smoke engulfed Aero Contractors’ flight NG316 from Port Harcourt airport to Lagos, triggering panic among the passengers. “The smoke engulfed the cabin some 20 minutes after take-off and continued until it touched down in Lagos”, according to reports.

Days later on April 20, 2017, two aircrafts belonging to Air Peace collided with each other on the tarmac causing damage to the airplanes. On April 21, 2017, a Dana Air flight from Lagos to Port Harcourt made an air return after it collided with a bird mid-air.

No doubt, air disasters are not peculiar only to Nigeria, but righting these wrongs isn’t rocket science. These are surely ominous signs of a looming fatal predicament. School kids were wasted years ago but here we are still playing this dangerous game of double standards. I can hear them crying from their graves, all they ever wanted was to go to school and become productive adults, but we watched them being roasted to death in a fiery furnace of a crashed aircraft. Who knows what those kids could have become. One of the two survivors of the Sossoliso mishap, Kechi Okwuchi, overcame all odds to reach the finals of the music reality TV contest, America’s Got Talent.

This self-induced coma shouldn’t last forever. Our mumu don do, apologies to Charles Oputa of the Charly boy fame. However, I grew up to hear that ‘a dog destined to be lost in the forest does not listen to the whistle of his master (the hunter).’ Is Nigeria’s aviation sector that proverbial dog? God forbid, but serious tasks lie ahead if we are to crawl out of this mire.

Continue Reading
You may also like...
Related Topics:aircrafts or flying coffins

Know Your Right: Nigerian Police Officers Have No Right To Arrest You For Debt
Bill Gates And The Nigerian Ostriches