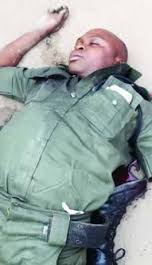 The trigger happy police Sergeant shot dead two brothers and one other at Paulson Hotels Anibaba Street, Ketu after a drink­ing spree.

The state Commis­sioner of Police, Mr. Fatai Owoseni told Daily Sun that the policeman in­volved would face orderly room trial after which he would be officially dis­missed.

Owoseni who described the policeman’s action as embarrassing and callous said: “We would try him even in death and dismiss him for his actions. We want to use this medium to sympathise with the fami­lies of the deceased and we apologise for the irrational actions of the policeman who also took his own life.

James, on Saturday shot dead three male customers before killing himself at a hotel in the Ketu area of the State.

It was gathered that among the deceased were twin brothers identified as Taiwo and Kehinde Oyesunle and their friend, simply identified as Jeje. The twins were said to be the only children of their mother.

The tragic incident; which took place outside the premises of Paulson Hotel at about 4:20pm, threw the entire neighbor­hood and its environs into confusion with passers-by and residents running for safety.

According to eyewit­nesses, trouble started when the police Ser­geant with Force number 217884, threatened to shoot customers if they failed to buy him an alco­holic drink.

The policeman, who was said to be a chronic smoker of Indian hemp, however, felt offended af­ter the victims, Taiwo, Ke­hinde and Jeje cautioned him.

The eyewitnesses said the policeman ambushed and killed the three young men, who were in their early 30s, as they stepped outside the hotel premises where they had gone to celebrate Jeje’s birthday.

It was gathered that when he realised the grav­ity of his action, James shot himself in the chest.

An angry mob, which later gathered at the scene of the tragedy, attempted to burn down the hotel and destroy properties within its premises.

Irate mob threw bottles and stones at the hotel as lodgers ran out of their rooms with their luggage and fled the scene.

The hotel was said to be completely deserted by staff and guests few hours after the incident.

The youths also wanted to burn the body of the po­liceman, but policemen, who later got to the scene, calmed them down.

Policemen led by the Divisional Police Officer of the Ketu Police Sta­tion arrived at the scene at about 5.30 pm to carry the body away.