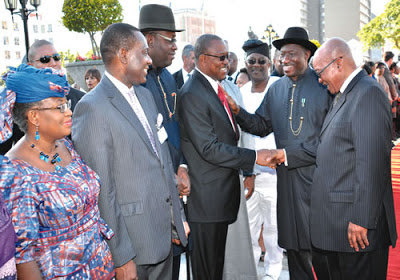 NIGERIA and South Africa have signed a Memorandum of Understanding (MoU) to make it unnecessary for nationals of both countries holding official or diplomatic passports to acquire visa before travelling to either country.

The MoU was signed on Tuesday between President Goodluck Jonathan and his host, President Jacob Zuma, during a closed door bilateral session between the two leaders in the South African president’s office in Cape Town.

Other MoU signed between the two countries were on cooperation in legal field, oil and gas sector, power sector development, environment, defence cooperation, women development and empowerment, as well as child development.

There were also bilateral agreements on geology, mining, mineral processing and metallurgy and fields of information and communication technology.

The two leaders also agreed on the need for stronger cooperation in other sectors, including economic, social and political development on the African continent.

Speaking after the meeting, Zuma observed that Jonathan’s visit to South Africa had generated a lot of interest, excitement and optimism among its citizens in view of the historic relations between the two leading economies in Africa.

“We have a duty to take this historic relationship further. Our two countries have already grown very warm bilateral relations structured through the bi-national commission that was officially inaugurated in 1999,” he said.

The South African president observed with delight that over 100 South African companies were already doing businesses in Nigeria with the biggest investment being in the telecommunication sector.

He spoke of the plan for the country to expand into other areas such as engineering, construction, banking, oil and the media, noting the need for both countries to promote people to people relationship, especially through tourism, which he said had generated huge foreign direct investments for the country.

“Last year alone, South Africa received a total of 73,282 Nigerian tourists, which is an 13.8 per cent increase from 2011, contributing about 720 million Rands to the South African economy within the period,” Zuma revealed.

In his remarks, Jonathan noted that the signing of nine bilateral agreements between the two countries was a major achievement that would enhance the critical role of Nigeria and South Africa in transforming the continent.

Meanwhile, President Jonathan has stressed the need for African leaders to give the fullest possible attention to the economic emancipation of their countries now that they have successfully liberated the continent from colonialism, racism and apartheid.

According to him, “On the 25th of this month, Africa will be celebrating the golden jubilee of the Organization of African Unity, now the African Union. As we take stock of the achievements of our continental organization, it is also appropriate that we reflect and decide where our continent should be in the next fifty years.

“That destination has to be a democratic and united Africa that is at peace with itself and can compete with the rest of the world,” Jonathan said.

The president noted that Africa has emerged as the new frontier for trade and investment in the world, added that African leaders must rise to the challenge of managing the new opportunities presented by this situation for the benefit of their peoples and countries.

Furthermore, he said: “There is certainly a lot more that we can do. We must work together to put an end to the exploitation and exploration of Africa’s resources for export without any value added; African countries must transform from being primary sources of raw material into producers to create jobs and opportunities for our people.

“We must check the loss of Africa’s trained manpower to already developed countries. We must work together, to promote trade and investment among our countries and build trans-national infrastructure in such critical sectors as trade, telecommunications, and transportation in order to fast-track the process of people-centred, continental integration.

“The Cause Of Death Among Nollywood Actors & Actresses Is Known To Me” – Pastor Chris Okafor
Air Nigeria Victim Calls For Justice…They Owe Me N282,000 Please Help