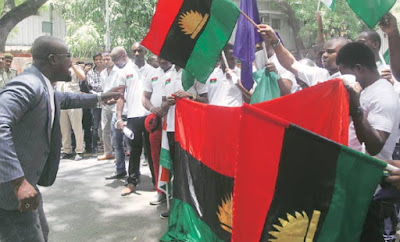 What is happening in the South-east presently is a matter of legitimate public concern as we are witnessing the festering of an avoidable bloodbath in the region and the country. Those urging on both Kanu’s IPOB and the Nigerian Army are not helping the government, the Igbo or the Nigerian project. The history of Nigeria shows a paradoxically counter-cyclical pattern of violence in different geopolitical zones since independence from electoral violence to religious bigotry.

Nigeria’s return to civilian rule in 1999 intensified the power struggle among the various regions of the country to recast alliances, develop rules of power-sharing without attempting to strengthen people-to-people relationships and the building of inter-ethnic cohesion needed for the socio-economic and political rejuvenation of our country. The departing military despots positioned their cronies to take over the commanding heights of the national economy to the detriment of the common man.

With increasing hunger and despondency and the failure to meet the expectations of the masses, the cries of marginalization and demands for the equitable distribution of the nation’s resources by ethno-religious groups became very loud. It is distressing to note that with each successive election and the coming to power by a new administration, opportunities for consolidating national integration and cohesion have been misspent and mismanaged by Nigeria’s political class.

Undoubtedly, the current democracy is facing multifaceted challenges on economic, religious, social, and political fronts. It needs a sagacious approach to ensure that we pull through and ensure the sustenance of democratic growth and survival.

Economic disempowerment and inadequate access to the governance process are barriers to government performance causing public discontent. Consequently the common man remains indifferent to national politics and integration which induces undemocratic forces to intervene. This is part of the reason we have a Nnamdi Kanu and his Indigenous People of Biafra (IPOB) in our hands. He leads a disenchanted group of young men who are angry about the marginalization of their region. They feel left out of the country. They feel marginalized. They see the proverbial national cake being devoured while opportunities for self-actualization are diminishing.

Where the majority of the population is illiterate and stands unaware to democratic concepts, the utterances of a character like Nnamdi Kanu becomes very alluring.

Truth be told, majority of the people have lost confidence in our type of federalism. The centre is too strong. The people feel denied of their genuine legal, cultural, political and constitutional rights. The crisis over our constitutional development, whether to go back to parliamentary form of government or maintain this wasteful presidential system is still unresolved. There is no consensus on the type of police structure that befits us as the cacophony of voices calling for state police appears drowned by a conspiracy of silence from the authorities.

The fate of the Niger-Delta people when their oil dries up is unknown. The imbalance in the political structure of the country where a state like Lagos still has 20 local government areas compared to Kano state with 44 LGA’s is glaringly unacceptable.

Though the present government promised restructuring of the country, no substantial efforts has been evinced yet to redress the woes and the anti-centre feelings of most Nigerians. These issues if not addressed aptly will get aggravated in years to come with or without a Nnamdi Kanu.

An immediate restructuring of the country along the lines of fiscal and political federalism is now an imperative. Python or Tiger dances will not solve the problem. Militarization will not achieve the desired results. We need the participation of all Nigerians to ensure structural improvements in our national paradigm. The time to talk is now and a NIGERIA RESTRUCTURING TABLE is the best place to begin the conversation.

Continue Reading
You may also like...
Related Topics:battle, biafra, nigeria

Biafra Quest: A Symptom Of Gross Injustice & Inequity In The Present Nigerian Federation
Where Is Nnamdi Kanu Now?