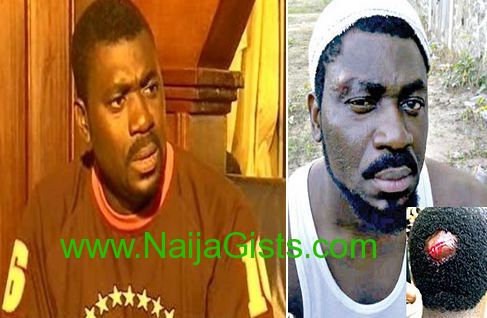 Nigerian / Yoruba actor Ayo Badmus was brutally beaten at the home of a cinematographer, Tunde Kelani, by thugs safeguarding a council chairman a week ago . He would have been beaten to death if not for the quick intervention of his wife and individuals around. While narrating his ordeal to Vanguard, Ayo Badmus said:

“It’s true that I was beaten and almost killed by the thugs guarding the Chairman of Oshodi L.G.A. My wife, my brother and myself went to pay a courtesy to my boss, Tunde Kelani on Sallah day.

When we got there, I went round to greet people and when I got to where the Oshodi L.G.A Chairman sat, I wanted to shake him when his brother said I ought to have prostrated. I didn’t reply him even when he started insulting me, saying actors are stupid and useless.

I made to leave when suddenly, I saw a group of thugs, numbering up to twenty pounced on me and started beating me up. They broke bottles on my head, kicked me and almost killed me if not for my wife, brother and other people who came to my rescue.

I’ve done a lot for the Lagos State Government even without being paid. Why should I then be treated in such a manner like a criminal? What the Chairman of Oshodi Local Government and his brother did was wrong. They are public servants and should be polite. I never met them before in my life. Neither did I involve myself in any kind of politics. That day was the first time, I set my eyes on them. They probably felt intimidated by my presence and the way people around hailed me”

What kind of injustice is this in Nigeria. This is lawlessness. How can someone be beaten for not prostrating for a local chairman ?