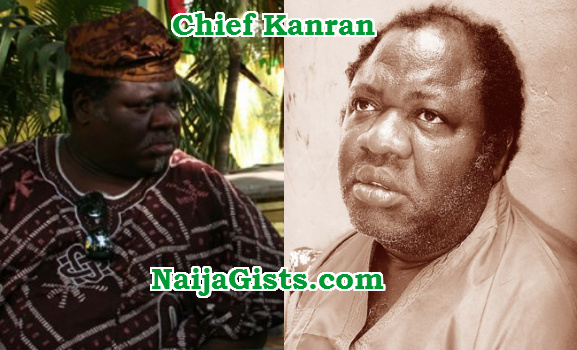 For actor, Segun Aderemi, otherwise known as ‘Chief Kanran’, acting, first and foremost, is a culture.

His face is synonymous with periodic drama settings in both English Language and Yoruba. Also, he is not scarce in theatre productions, television and of late home video.

That is one achievement that cannot be divorced from his background of combined academic and travelling theatre training.

One of the most notable kings that emerged in the old Oyo Empire, Alafin Kanran, was, in the mid ‘80s spotlighted in the dramatic prominence on television. Segun Aderemi, the actor behind the daring character explains that the role was given to him as a result of confidence of fate. After several theatre productions of the title, late Femi Philips (husband of actress, Idowu Philips a.k.a. Mama Rainbow), and leader of Osumare Theatre Organisation, had invited Segun to be part of the television version of Alafin Kanran for the then newly established Lagos Television, Channel 8.

Through a group they founded, Ananse Playhouse, he, his brother, Yemi Remi, Albert Ogunlade, and Bassey Effiong produced such works as Kongi Harvest, Kiriji War, Lamgbodo and the legendary Ovonramwen N’gbaisi.

Chief Kanran was the toast of drama lovers at a time, mostly playing a rich man with a physique that suits such character, you’d never believe he’s still not one to be called rich yet after about decades of entertaining the world through his craft.

He was quoted to have said, “The journey to stardom has been rough but we thank God for the past 50 years. All through my 50 years as an actor, I have never regretted my choice of career. However, it makes me sad when I travel and see our contemporaries abroad.”

He would later register his displeasure, “An actor of my caliber should be a billionaire by now but such is not the case in Nigeria. Our government does not appreciate our profession. The only time we are useful to them is during political campaigns or when they want to publicise themselves and that is not right.”

He remains in the forefront of the campaign for the return of stage plays and also seeks government participation in the industry to make acting and allied talents more lucrative. But he has even confessed he’s not a rich man and that he’s far from where he ought to be in net worth.