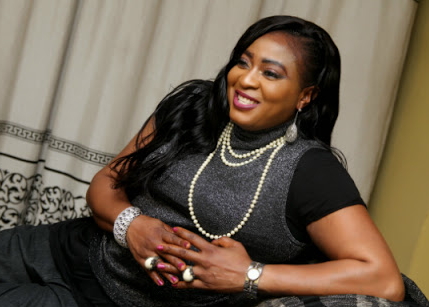 Ayo Oladejo, aka Oyinda has finally opened up on the bad tales trailing her life overseas. The beautiful actress, is one of the strong members of Odunifa caucus established over 30 years ago by Yinka Quadri, Ogogo, Abbey Lanre and co.

Oyinda was in the news a few years ago that she was arrested and sent to prison by the government of the United Kingdom. Oyinda, who recently relocated to Nigeria, rubbished the news in an interview she had with City People’s Gbolahan Adetayo.

When we asked her to shed light on the cocaine saga, she explained,

“the news caught me unawares, it was my mother who first called to inform me about it”.
I read it in the news that I was arrested overseas for drugs, the story was everywhere and I kept receiving series of calls, then I had no option than to return to Nigeria. I went straight to my caucus, Odunifa and together with my bosses; we went for a television programme sponsored by Corporate Pictures for an Interview. The reporter was called on the programme and he came.

I slapped him and tore his cloth; he confessed that some people actually gave him the story which he failed to confirm before he published it. But guess what, after I came to Nigeria, a lot of people interviewed me and this reporter in question spotted me with his 2 eyes. Some of my media friends, Yemi Oladehinde, Femi Davies and co saw me but to my surprise, the story started affecting me in different ways.

There was a day I was traveling to Italy and I saw some of my fans who walked up to me and said sorry Aunty Oyinda. This same thing also repeated itself about 3 weeks ago, when another person came to say “Oyinda don’t worry, everything will soon be okay, don’t mind them, going to prison isn’t the end of one’s life”.

This statement really weighed me down because this is an event that didn’t happen. In fact, I haven’t slept in the police station before. Some of my family members that it’s been a while I saw them still talk about it and reign curses on the person who wrote the purported story.

This unconfirmed report affects me psychologically. Sometimes if I am at a particular place and people are greeting me strangely, I already knew what they are talking about and it will affect my mood throughout the day”.

We further asked her about what really prompted the story initially, the ever-ravishing actress said, “honestly, I don’t know what really happened because that period, I had problems with my traveling papers and I wasn’t taken to the police station let alone a court for that matter so I don’t understand where they got the story from. I was given 6 months permission but I eventually used a year and if you were caught, the worst case is that you will be sent back to your country not prison, and the newspapers that carried the story saw me when I came back to the country almost immediately, If I was in the prison as it was reported, would I be able to come?

I eventually renewed my travelling documents, I am just thinking may be that was what they heard before the false news came up. I thought it was an insignificant thing when people were saying it but when it escalated, I couldn’t bear it again, my mum was crying because she could no longer feel comfortable in her area again.

I was forced to buy a ticket to check on her and when I came back, I had to get another travelling document”, she explained.

97 Nigerians Deported From South Africa In The Wake Of Xenophobic Attacks
Photos: Spiritual Goat With No Blood Reportedly Caused Fatal Accident That Killed 6 In Anambra