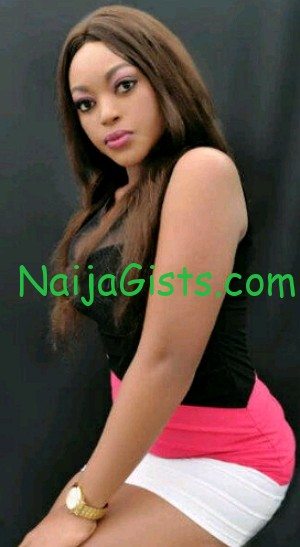 Nigerian actress Biola Ige is an epitome of beauty. She joined the industry about four years ago and already she has become one of the most-sought- after actresses in Nollywood. Recently, she suffered a terrible growth of her thyroid gland that affected her neck, tongue, complexion and ultimately her budding career.

Then, it looked as if, all was over for her. But with divine intervention, she was flown to India where an operation was successfully carried out on her. And today, Biola can live to retell her story. In this interview, she talks about the operation, the rumoured controversy between Tonto Dikeh and her new-found faith- Hinduism. Enjoy!

How did you become an actress?

I have always wanted to be an actress since I was a child. Then, I wanted to star in Hollywood movies because my dad was a movie person. As a child, I had the opportunity to watch all the hit movies produced in Hollywood alongside my elder brother. My dad also supported my dream, but he wanted me to travel to America after my studies.

Unfortunately, when I completed my secondary education, my dad was not as wealthy as he used to be. He couldn’t send me to America again as he promised. As a result, there was nothing I could do. Like I said earlier, I fell in love with acting, but l wanted to act in Hollywood. When it didn’t work out because of lack of finance, l moved to Lagos after my University education. I went for auditions in Lagos and landed my first role in “Blindfold” produced by OJ Productions.

How many movies have you done to date?

Acquiring experience in whatever job you are doing is very vital and my experience has helped me star in more than fifty movies and I am still counting. Yes, I have been in the industry for about four years. I am proud of my achievement. I would have starred in more than fifty movies now, if not because of my sickness that took me to India. I am back in the country though lam not looking the same again. I am grateful to God for giving me my life back.

Which role has been the most challenging in your career?

The most challenging role for me was the one I played in the movie “Blackmail”. In that movie, l played the role of a model who married a rich man. Complications set in when the model’s old flame showed up as an employee in the company owned by her husband. And the situation became more complex when she fell again for the old flame who was already married to another woman. The intiruges at play were very challenging.

Which of your movies has been most financially rewarding and how much did you rake in from it ?

The monetary compensation is good, but it is not the most important thing when it comes to growing in your craft. Yes, l was rewarded for some of my jobs, but l cannot tell how much was given to me. I remember, “Blackmail”, Grand Player”, “Shakira”, “Darkest Link” and “My Fantansy”, were quite rewarding.

Is it true that you went to India to undergo an operation?

Well, I was very sick at some point in my acting career. I ran different tests because l didn’t know what was wrong with me. The test results showed I had thyroid problem. So, I travelled to India for treatment as well as to worship. I am sure people would think I went there for spiritual powers.I am sorry to disappoint you guys because I am not that kind of person.

What do you mean, you had a thyroid problem?

Having a thyroid problem is a grave disorder and illness. It is as a result of the expansion of the neck. It occurs when your thyroid gland over works itself or under works itself because of lack of the nutrient known as iodine.

When you said to worship, what do you mean by that?

It was an avenue for me to worship my God and yes, l worship as an Hindu. I know what you may want to say. I do not see anything wrong with following any religion of your choice. It is a free world. And I choose Hinduism.

What is your view of women who do body-enhancing jobs?

It is all about choice, so if you don’t feel good about your body and you have the money to do body makeover surgery, then do it with joy. As for me, I am good with the body God gave me. If a man doesn’t like me the way l am then he is on his own. But my only advice is that you should love yourself the way you are, there is nothing wrong with the body God gave you.

What would attract you to a man?

The way l carry myself is unique, but you can never tell what these men see in the ladies that attract them! Moreover, we all have something that should attract different men as the case maybe. Most men see things we don’t even know we possess. So, I would leave that to the men to decide what they see in me.

Did you become an Hindu when you travelled to India or while you were in Nigeria?

I was a Hinduist before I travelled to India. I was a Christian before I changed my faith and I must tell you I have found peace in Hinduism. And in India, I felt at home. I didn’t feel like returning to Nigeria again because everyone was so nice to me.

What is the controversy between Tonto Dike and yourself?

When I was sick, there were a lot of stories flying here and there that Tonto Dike was responsible for my sickness. But l didn’t believe it because we were not even friends before I fell sick. And why would Tonto Dike want to harm me when she has made a name for herself?

Are you in a relationship?

I don’t have time for that at the moment. I have just returned from a long break of illness and l need to make up in my career for the time I have lost.

When are we hearing the wedding bells for you?

Marriage comes naturally in the course of living and meeting people. I am not in a hurry to tie the knots. In fact, I am taking another three years to grow myself before thinking about marriage.

Some of your female colleagues are getting married to married men. Would you marry a married man?

When I am in a relationship, it takes my whole being and life. So if I am in love, l fall hopelessly in love, hence l cannot see myself loving another woman’s husband. I cannot share my man at all with any woman as I do not share my love.

Who are those people you admire in the industry?

I admire everyone I have worked with and my colleagues in the industry. I cannot actually mention one person as being more special to me. They are all different and special in their own ways.

Before you take up a role what do you consider first?

I picture the role and character in my mind’s eyes and how it is going to play out. I also consider what people would say when they see the movie and the character I played. If it will boost my image then the role is mine, if it is not good for me then l leave it.

Do you have any regret since choosing acting as a career?

Tell us a little about your childhood?

My childhood was awesome! I was a kid who loved to play football when I was growing up with my siblings. We went swimming in the river, climbing mango trees to pluck mangoes and all that. I was a tomboy while growing up, I never did girls stuff at all.

Are you related to the popular late Bola Ige family?

No. It is just a case of name sakes; late Bola Ige was from Oyo state, while l hail from Osun state.

Which part of your body do you consider sexiest?

Most people would say they prefer my boobs, shape and all that, but to me, I prefer my eyes. They are the mirror to my soul.

Nollywood is really evolving, with more sensual scenes. Would you take a role that involves you having sex on set?

I won’t describe it as having sex because it is drama- a make- believe world; hence everything done is not real. I would describe it as pretending to have sex. And yes I have done that in many movies, but they were never real.

How do you describe Nollywood love-making scene?

Nollywood love-making scenes are not like Hollywood where boobs and bums are exposed. In Africa, it is not in our tradition to do stuffs like that; hence the producers, directors and actors themselves are careful how they interpret such roles because of their futures.