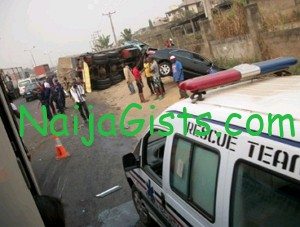 At least 8 people died on Thursday in an auto crash that occurred on Lagos-Ibadan expressway.

The sad incident was said to have left 12 other people seriously injured.

The eight victims reportedly died on the spot.

However, some people who saw the accident scene said the casualties were more than reported.

An unconfirmed report said the victims were 15 persons and about eight of them had died as their remains were left on the ground for some minutes.

The crash which occurred at Km 19 on Ibadan – Lagos Expressway involved a Toyota Hiace bus with registration number YB 65 MUS.

Vanguard gathered that the bus was traveling from Osogbo to Lagos when it skidded off the road and somersaulted severally.

Eyewitness account attributed the cause of the accident to reckless driving.

It was further gathered that N360, 275 cash and 25 mobile phones belonging to victims were retrieved from the scene of the accident.

In a similar development, another accident happened at Premier Hotel junction, Oremeji area of the city when a bus ascending the hill had a faulty brake and rolled down the road. Some people who were injured were rushed the nearby Badejoko Memorial Hospital, Ibadan.

When asked for confirmation of the accident, the Police Public Relations Officer, DSP Ayodeji Lanade said he was out of town.