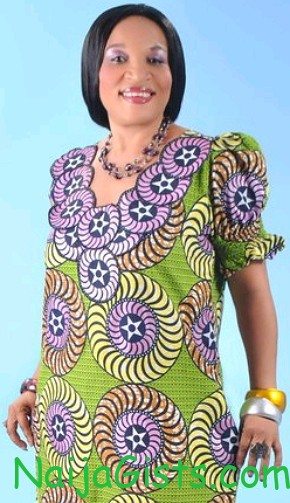 Ngozi Nwosu is dying. She has lost it all; weight, strength and vigour but not her talent and deep sense of humour which she displayed during the over one and a half hours we spent together recently. Her emotions ranged from profound despair to occasional outbursts of laughter at her own jokes.

When i got a call from the organisers of Who Wants To Be A Millionaire to come play in the special Celebrity Edition last week, i did not know it was the cause of our Dear Ngozi i will be playing for until I got there. The Director revealed this to me few minutes before recording began as Ngozi sauntered in.

One of the first signs that things were no longer right with Ngozi was the fact that we had to delay recording because while everybody else was virtually fanning themselves due to the studio lights, Ngozi was shivering from cold so much that the producers had to get her cardigans. I was flustered.

When the programme eventually got underway, Ngozi still helped to answer some questions. She summoned every ounce of strength in her body to look good for the cameras. Then, it occurred to me that she might be withering, with life slowly ebbing away from her before our very eyes, that acting talent is still intact. As we made our way out of the studio after the recording, she turned to me, despair etched on her brows as her eyes glistened with tears, and said, “Seun, do you know I was here (WWTBAM) few years back to play this game for Samanja and I didn’t know that I will be here years later for people to play for me to survive. See life.” She burst into tears. I fought back tears myself. I had never been so close to crying in a long while but Ngozi’s story will break the steeliest of hearts.

Moments later, we sat down to talk in the ante-room of the studio. Her nurse told me that despite the fact that she has lost half her original weight, she was better than three months back when she could not even get up from bed in her Surulere, Lagos apartment. “Thanks to God and medical attention, she is willing to give living again a chance by fighting,” the nurse said.

When we probed further on what exactly her ailment is, Ngozi wouldn’t say but instead invited me to her home. Last Sunday, I was Ngozi’s guest, where she showed me results of tests stating that she had kidney and heart-related issues. I spent hours in her house as she led me by the hand through the whole gamut of her illness. She told me she decided to divulge everything because of widespread speculation that she was HIV positive. “I don’t have AIDS o,” she declared.
The bottom line now is that Ngozi needs N6m to treat herself abroad. And she needs it fast. Ngozi is willing to live longer but we have to support her.

Bononline has therefore decided to collaborate with well-meaning Nigerians to save this celebrated thespian who brought laughter to many homes especially as the cantankerous Peaceful Peace in popular sitcom, Fuji House of Commotion. You can send your widow’s mite to Ngozi Nwosu GTB 0052851673. May God bless you and all that you take important as we rally round to save beautiful actress.

God help us all

Nigerian Student Living With Face Tumours Gets Stay In The US (Victor Chukwueke)
Is The World Really Going To End Today December 21st 2012?