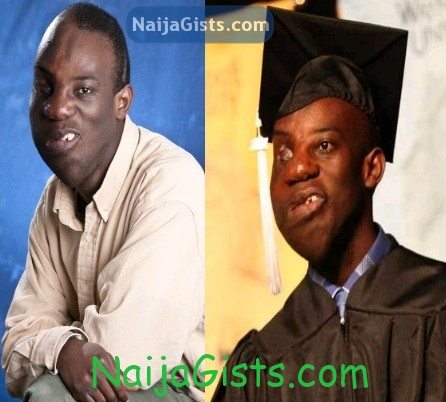 Dec 21, 2012 – Nigerian Man Living With Face Tumours Gets Stay In The US (Victor Sopuruchukwu Chukwueke)

A Nigerian man suffering from a bizarre hereditary condition that causes face tumours has earned a US House Of Representative bill to legally stay and study in the United States Of America. naijagists.com

The legislation was sponsored by United States Senator Carl Levin in Michigan and it only applies to Victor Sopuruchi Chukwueke.
The bill has been approved by US House of Representative and has been forwarded to President Barack Obama for final approval.

The legislation, made solely for Victor Sopuruchi Chukwueke , will permit him to stay in the United States despite his visa expiration.

He is going to obtain the green card he needs to legally stay and complete his education in the US assuming President Obama approves the legislation.

A Little About Victor Sopuruchi Chukwueke

When he was merely 15, Victor was brought to the United States for medical treatment. Since then, he has had seven major surgeries. Unfortunately, Victor fell out of immigration status while he was 16 and undergoing a painful surgery. He did not have the help he needed at the time to navigate the complexity of the immigration system.

Despite huge obstacles and a life-threatening medical condition which rendered him blind in one eye, Victor Chukwueke graduated from Wayne State University and received admission into medical school, only to be told that he could not attend because he did not have a green card. Refusing to give up, Victor sought the help of Senator Carl Levin’s office, which introduced a private immigration relief bill for him.