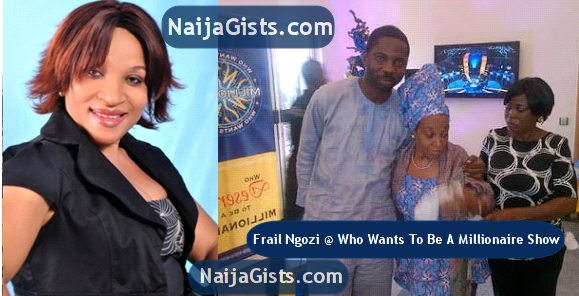 Nigerian actress Ngozi Nwosu who has brought laughter to the faces of many is currently in a bad health state. naijagists.com

For over 4 months now, the star actress has been secretly battling kidney disease which has kept her out of the public.

Few days after Ngozi Nwosu’s health condition was made public, her colleagues tried to raise money for her but she allegedly refused.

The actress later travelled to Cameroon to hide for a while and to later return in a more terrible health state.

According to a reliable source, the actress was diagnosed with HIV after a series of medical test to ascertain the kind of disease she’s battling.

On Saturday the 15th of December, the actress was spotted on Who Wants To Be A Million TV show looking weak and very fragile.

Ailing Ngozi Nwosu was able to secure N1 million to begin her treatment with the help of Seun Oloketuyi.

According to a Nollywood source, Ngozi Nwosu is set to resume her treatment in India soon.

The hilarious actress has indeed brought joy to many and may the Lord grant her a speedy recovery.