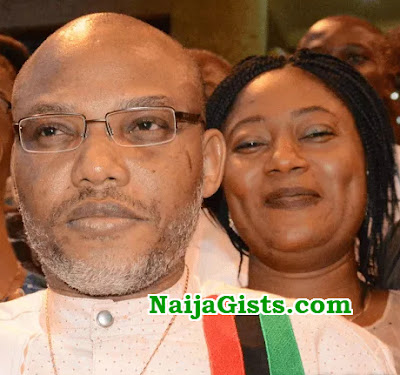 September 16, 2017 – Nigerian Army Has Conferred On Kanu An Importance & Status He Does Not Deserve

President Buhari administration should call the bluff of the leader and members of the Indigenous Peoples of Biafra (IPOB), Nnmadi Kanu, and firmly assert its authority to defend, protect and preserve the territorial integrity of the country as the custodian of a legitimate electoral mandate until the expiration of its tenure and the next elections are held.

Ever since his release from jail on bail, Kanu has violated with impunity the stringent terms he agreed to in order to regain his liberty. His incendiary rhetoric against the Nigerian state and vituperative provocations against other ethno-cultural groups in the country have only worsened to the point of delusive megalomania with the Igbo leadership elite making feeble efforts to rein him in.

Perhaps buoyed by the godlike adoration of his apparently no less misguided and ill-informed followers, Kanu has acquired an exaggerated and inflated sense of self-importance in which he sees himself as being above the law. His photographs have been posted online seated on a monarchical ‘throne’ of dubious provenance. Pictures of his disciples scrambling to kiss his feet have gone viral on social media. If his admirers’ choose to transmogrify him into deity, it is their business and their right. The truth, however, is that until he succeeds in actualizing the creation of his idyllic state of Biafra, Kanu is fated to live within the stipulated legal limits and boundaries of the Nigeria he contemptuously dismisses as a Zoo.

Not only has Kanu’s IPOB vowed to prevent the governorship elections in Anambra State scheduled for November from holding, he has openly incited his members to violence against Christian leaders of Yoruba origin who dare step on Igbo soil. He has launched what he describes as a Biafra secret service. Daring the Nigerian state to re-arrest him, Kanu has called on his supporters to burn down the Nigerian ‘Zoo’ if any such attempt is made. No government will fold its arms and allow its authority and the stability of the polity under its jurisdiction to be so cavalierly and recklessly undermined. That obviously informed the decision of the Attorney General of the Federation, Mallam Abubakar Malami (SAN) to seek a court order for the re-arrest and detention of Kanu for violating his bail conditions.

It is, however, unfortunate that rather than keep its cool and continue the process of bringing Kanu to book within the framework of the law as the AGF has so commendably begun, the Nigerian State has allowed itself to be provoked into overreacting to the sheer idiocy and buffoonery of Kanu and his supporters. I find it difficult to understand the rationale behind the ongoing show of force in the restive South-East region ominously codenamed ‘Operation Python Dance II’ by the Nigerian military.

Yes, the armed forces have the right to undertake military exercises in any part of Nigeria in the pursuit of its constitutional responsibility to protect and defend the country’s territorial integrity and cohesion. They have a duty to demonstrate their capacity to contain and neutralize any contestants of the legitimate monopoly of the instruments and techniques of coercion within a stipulated territorial jurisdiction, which is the distinguishing characteristic of the state.

However, has IPOB become such a potent military threat as to necessitate an exercise on the region-wide scale of ‘Operation Python Dance II’? It is doubtful. Kanu’s empty posturing and baseless boasting really constitute no more than what the late Chuba Okadigbo would readily dismiss as the ‘ranting of an ant’. He must be feeling on top of the world to have the Nigerian army taking him so seriously. IPOB ought to have been at best treated as an irritant by the Nigerian State and contemptuously left to the Nigeria Police to deal with while the professionally furtive, and thus more dangerous, secret intelligence services deploy their training in stealthy operations to insidiously penetrate, monitor and ultimately neutralize the belligerent group.

As it is, ‘Operation Python Dance II’ has conferred on Kanu an importance and status he does not deserve. It creates the impression that Kanu’s significance encompasses the entire South-East, which it does not. Yes, his exuberant supporters may be more vocal and active than the silent majority. There is hardly proof that IPOB enjoys the support of a substantial stratum of Igbo land in the group’s quest for secession and the violent implications of its methods. Millions of enterprising Igbos not just in the South-East but across the country are working very hard daily to earn a living and many of them are doing very well against all odds. Resort to war must be the last thing on the minds of such industrious Igbos. But exercises like ‘Operation Python Dance II’ can only stir up emotions and drive otherwise indifferent and uncommitted Igbos into the welcome embrace of IPOB.

Without meaning to disrespect the professionalism of the military high command, it is doubtful that the implications of ‘Operation Python Dance’ were rigorously thought through before the exercise was embarked upon. IPOB has naturally responded by playing the victim and underdog to whip up sentiments in its favour. It has sent unarmed hoodlums to senselessly hurl stones and other missiles at fully armed soldiers knowing well that the latter are more likely to respond disproportionately no matter their theoretical rules of engagement thus eliciting popular outrage locally and globally. On the propaganda front, Kanu’s IPOB has thoroughly outwitted the military effectively utilizing social media for the purposes of disinformation and propaganda towards the achievement of its objectives.

In Abia state, where the military show of force was flagged off, the impending breakdown of law and order that ensued, resulting in the burning down of a police station, attacks on military posts, vandalization of a hospital, random fatal shootings by unidentified gunmen, throwing of petrol bombs, setting up of bonfires on major highways and the threat to the lives of northerners resident in the state, forced the governor, Mr. Okezie Ikpeazu, to impose a three day dusk to dawn curfew in the first instance. The deteriorating situation obviously compelled the military to accede to the withdrawal of soldiers from the streets of Aba and Umuahia even though it maintained that ‘Operation Python Dance II’ would continue across the region as planned.

Even if ‘Operation Python Dance II’ was necessary and justifiable, was there any need for the soldiers to carry their fiery dance right on to the street where Nnamdi Kanu lives at Afara Ukwu in Abia State? This, of course, only provided IPOB with ammunition to fuel its propaganda to the disadvantage of the military. The indirect Lionization of Nnmadi Kanu through the ongoing ‘Operation Python Dance II’ is absolutely needless. Kanu and his IPOB are not synonymous with the Igbo and the South-East. If he has so brazenly violated the terms of his bail and contemptuously threatens the peace, stability and unity of the country, the IPOB leader should simply be picked up with minimum fuss and made to face the law without the current unnecessary and wasteful military razzmatazz.