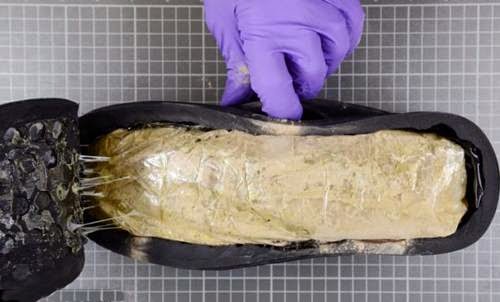 A Nigerian has been arrested in New Delhi, India with heroine concealed in a lady’s shoes.

The 23 year old Nigerian, Odeomenan Kenneth Ozioma kept the heroine, weighing 330grammes in specially made cavities in the shoes, meant to be sent by courier to the United States.

“The heroin weighs 330 grams which is worth Rs 70 lakh(about $120,000) in the international market. The arrested man has been identified as 23-year-old Odeomenan Kenneth Ozioma. He was nabbed by a team led by DCP Bhisham Singh and ACP Zile Singh,” additional commissioner, crime branch, Ravindra Yadav, said.

The Times of India reported that police received a tip-off on April 14 about a Nigerian drug trafficker coming to Janakpuri Metro station.

“A team laid a trap and apprehended him. During investigations, 330 grams of heroin, cleverly concealed in the specially made cavities in the soles of women’s sandals, was recovered from his possession. He disclosed he was heading to Mahipalpur to courier the drugs to the US,” DCP (crime) Bhisham Singh said.

According to the Times of India, Kenneth completed high school education in South Africa and had come to India in November 2009. He started a business of exporting readymade garments and women’s shoes to Nigeria. But he was not earning much. When his visa expired, he moved to Mumbai where he met another Nigerian, Ike, at a party.

Ike showed him how to peddle heroin and other party drugs. He soon closed his business and devoted himself completely to his new occupation. He sent the money earned to his parents in Nigeria and started living the good life.