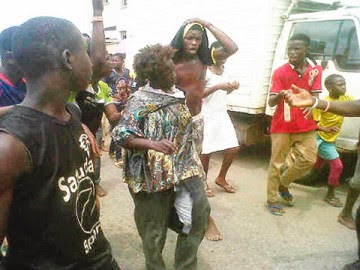 A woman said to be mentally-challenged escaped being lynched by an angry mob on Wednesday after she was allegedly caught with N100,000, two BlackBerry phones and an android phone.

Our correspondent, who visited the scene of the incident around Onabanjo Street, Oworonshoki, Lagos State, learnt that the incident occurred around 10am.

A resident, James Ogunkoya, told our correspondent that when some youths saw the woman with some money, they trailed her into a compound.

It was learnt that the youths, who suspected her of being a ritual killer, pounced on her and beat her to a pulp.

Ogunkoya said, “Around 10am, I saw a crowd around an unkempt woman. Some of the youths picked up sticks and were beating the woman. When I asked what was wrong, they said they found three phones and N100,000 with the her.

“They said the woman was not mad, but was only pretending to be mad so that she could easily perpetrate evil acts.”

Another resident said it was N50,000 that was found with the woman.

The resident, who declined to identify himself, said the youths started suspecting her when she was overheard speaking like a normal person with somebody two days ago.

“Some guys were convinced that the woman was only pretending because they overheard her talking with a man on Monday night. They also wondered where a mad woman could have found the phones,” he added.

PUNCH Metro learnt that policemen attached to the Oworonshoki Police Division were alerted by the noise of the crowd gathered at the scene.

A police team was said to have rescued the woman from the mob.

When our correspondent visited the station, the woman was seen lying on a bench near the counter of the station.

Our correspondent noted that she had a burst lip while her arms were bleeding.

A policeman, who spoke to our correspondent on the condition of anonymity, said attempts to verify the allegations were fruitless.

He said, “I have been asking the woman questions all day, but she has just been incoherent. She has even refused to tell us her name. At some point, she just started crying, so I let her sleep. I don’t even know if she is a mad woman.

“Also, when she was arrested and we searched her, we did not find any money, phone or ATM cards on her. Nobody has come to write any statement here at the station.”

The General Secretary, Oworonshoki Youth Forum, Babajide Kabiawu, blamed the incident on the fear in the minds of people since the arrest of ritual killers in some South-West states.

He said there was a need for the government to set up a special task force at the community level.

He said, “I do not condone people taking the laws into their hands. However, it is a reflection of the level of insecurity coupled with the discovery of the activities of ritual killers in Oyo and Ogun states.

“The notorious cannibal, Clifford Oji, used to parade himself as a mad man as well. We have also seen cases in our neighbourhood where supposed mad people kidnapped children. We want the government to support the community in setting up a task force that will evacuate mentally-challenged people.”