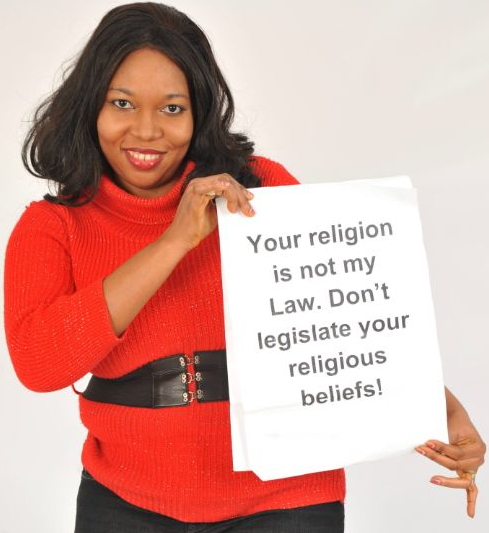 This article was brought to our attention by a liberal reader this afternoon and since then we have done a series of research on this woman a UK-based Nigerian atheist identified as Yemisi Ilesanmi.

In a recent interview with TELL magazine, Yemisi Ilesanmi, an openly bisexually woman expressed her sentiment over some negative response she received from Christians all over the world.

She took to her blog on Saturday to express her disappointment.

Yemisi Ilesanmi even went to the extent of bashing Abuja based Pastor Fatoyinbo over an alleged affair he had with Eze Walter.

I already know that many Nigerian Christians are really stupid; I just wish I could get over the severity of their stupidity and the glee with which they display it. My recent interview in a National Nigerian Newspaper, TELL Magazine, has given them an opportunity to display their ignorance, bigotry and delusion on various Naija blogs that shared the interview.

Reading the various comments many Nigerians left on this blog and this blog, amongst many others that reblogged the interview, has left me wondering if Nigerians hate Atheists more than gays!

Warning, if you are likely to want to gouge your eyes out when you read homophobic, ignorant comments, I’d advice you steer clear of the comment sections on these blogs.

Unfortunately, these religious believers and die-hard homophobes are not content with displaying their Homophobia, Biphobia, Transphobia and God delusions on the comment sections of these blogs. They are also very keen to share it with me on my facebook inbox and wall.

Many Nigerian religious believers are stupid enough to think invoking the wrath of their Skydaddy on me is scary.

They are bigoted enough to insist on sharing their imaginary God with me.

They bombard my inbox with silly scriptural verses as if quoting from their bible or Quran somehow makes their God real. In that case Batman is as real as their God; after all I can quote from Batman series.

Nigerian Christians throw tantrums because I do not wish to play with their imaginary Holy Trinity friends; God, Jesus and Holy Ghost. How very childish!

And to crown their stupidity, they leave ignorant, bigoted, hateful comments on my posts and interviews and then go ahead to request that I add them as friends on Facebook! Really, how much more stupid can they get! I bet like Pastor Biodun Fatoyinbo did to Ese Walters, these bigoted religious homophobes want to show me a level of grace I cannot comprehend. ROTFLMAO!

My wall is not a hangout for Homophobes, Biphobes, Transphobes or adults who insist on sharing their Skydaddy with me. I am highly allergic to ignorance; therefore I do not accept friendship requests from deluded hate filled beings. My FB wall is set to public, people are free to enjoy the posts and get enlightened but they should know that leaving homophobic, biphobic or transphobic comment or proselytizing on my wall will get their ignorant ass blocked.

I hear she is a single mother… Na wa o.

There is no one God can’t change. Keep her in your prayers