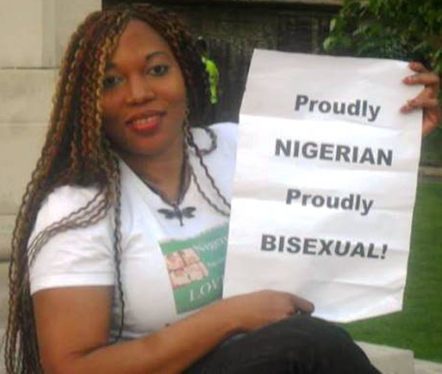 A United Kingdom based middle age Nigerian woman identified as Yemisi Ilesanmi is currently under fire for a controversial interview she granted to TELL magazine few weeks ago. 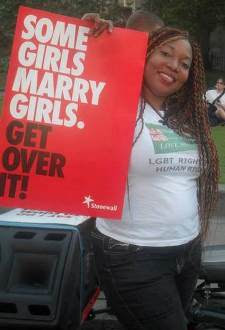 The Nigerian-British citizen who has come open about her bisexuality is now defending gay rights. She also claims she doesn’t believe in God (an Atheist)

Read what Yemisi said in this tell it all interview:

The very first thing we need to understand is that homosexuality, bisexuality, asexuality are all as natural as heterosexuality. Our sexual orientation differs; we are born with an innate ability to be emotionally or sexually attracted or not be sexually or emotionally attracted to same sex or opposite sex. Unfortunately, many African societies do not provide enabling environments to discuss sexual orientation. Sexual orientation does not harm anyone. A person who is attracted to opposite sex does not harm anyone so far it is a consensual adult relationship.

It is absurd when Christian gay bashers gleefully quote Leviticus 18:22 to justify why they want to jail and stone gays. Anyone who wants to quote from Leviticus should at least read the book to make sure they are  not guilty of any of the things condemned in the book. Leviticus also says you should not shave, you should not interact with a woman in her menstrual cycle,  thou shall not eat shrimps or shell fish, Lev. 11:10,11:6-8 thou shall
not touch the skin of a dead pig (therefore touching football without wearing gloves makes you unclean!) So, when Christians throw Leviticus at me, I simply throw Leviticus right back in their face.

My immediate family knows my sexual orientation, my father is late, and my mother is accepting of whom I am and has shown me love and support. To continue to be an important part of my life, you cannot be homophobic, biphobic or transphobic.

My atheism has nothing to do with my biséxuality. Atheism is simply a non-belief in God. My bisexuality is my sexual orientation, no connection. However, I must say, my atheism has helped me to stand up against religious bullies, who use the Bible and the Quran to justify their hate for gays, lesbians, transsexual and bisexuals.

Religion carries a lot of unwarranted weight in Nigeria and Africa generally. This should not be so. In fact, this is one reason the African continent is still very backward. When religion carried so much weight in Europe during middle Ages, it was wrought with wars, jihads, killings and ethnic cleansing.

Many religious Africans now use the ‘holy’ books to justify the oppression of members of their own society. Even when the original owners of the religion inform them that the book has been updated and some parts are no longer applicable, Africans still insist that it is must be applicable because it says so in the book they were given. How pathetic!

Whether Nigerians accept it or not, LGBT rights are recognised human rights. Unless, you can prove that Lesbians, gays, biséxuals and transséxuals are not human beings, well, you have no reason to deny them  their fundamental human rights. Unfortunately many Nigerians believe in the concept of sin. First, we must understand that sin is a religious concept. Not every Nigerian is religious. Your religion is also a personal matter, why drag other people into your personal relationship with Jesus, Mohamed or Obatala?

When I am told that homoséxuality is a sin, I just tell them their religion is not my law. The Bible or Quran is not my constitution, so why is that even coming up?

A Little About Yemisi Ilesanmi

Yemisi Ilesanmi is a Nigerian woman, resident in UK. She holds a Masters of Law (LL.M) degree in Gender, Sexuality and Human Rights. She is a trade unionist, human rights activist, an author, a poet and sometimes moonlights as a plus size model. She is a passionate campaigner for equal rights, social justice and poverty alleviation. Her debut book ‘Freedom To Love For ALL: Homosexuality is Not Un-African’ is available in paperback and kindle editions on Amazon. In sometimes, what she thinks as a past life, she was- – National Women leader/Assistant National Secretary, Nigeria Labour Party. – Vice President, International Trade Union Congress – Chairperson, ITUC Youth Committee – International Labour Conference (ILC) Committee Member on Applications of Standards – Founder/President, National Association of Nigerian Female Students. She is the founder and coordinator of the campaign group Nigerian LGBTIs in Diaspora Against Anti-Same Sex Laws.

Yemisi Ilesanmi is speaking openly about her sexual orientation probably because she is outside of Nigeria where homosexuality carries 14 years jail term.