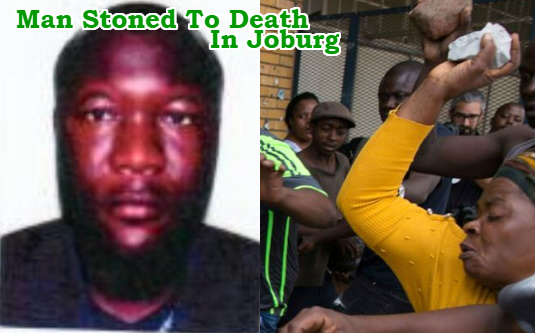 Nigerian Beaten To Death , Another Stoned To Death In Johannesburg South Africa Days After Jacob Zuma Was Honoured In Imo State

The Nigerian community in South Africa has confirmed the vicious killing of two members in that country within 48 hours barely a month after President Jacob Zuma was honoured by the Imo Government.

In October, a Nigerian man was shot dead in South Africa over an alleged 300 Rand (about N7,500) parking lot debt.

No fewer than 116 Nigerians have been dispatched to their early graves in the country through extra-judicial means in the last two years, according to Special Assistant to the President on Foreign Affairs and Diaspora, Mrs Abike Dabiri-Erewa.

A dependable source close to the Nigerian community told the News Agency of Nigeria (NAN) on telephone from Johannesburg on Tuesday that the first victim, Ikechukwu Mmanwoke Edmond, 40, was killed on Nov. 11.

The source said the deceased, a businessman and native of Ihembosi, Ekwusigo Local Government Area of Anambra, was killed in front of his house on Amant Street, Malvern, Johannesburg.

It quoted an eyewitness and neighbour of Ikechukwu, Sibongile as saying that six men came to their house and started breaking doors and taking out their personal effects.

“ When she (Sibongile ) raised alarm, they started beating her. When Ikechukwu came in and saw what was happening, he brought out his phone to call the police.

“A member of the gang took a brick and hit him in the face and he fell down. When the police arrived, he was already dead,” the source told NAN.

According to the source, police said they have commenced “investigation’’ into the death of the businessman.

The second victim, Eluka Agu, native of Ihiala also from Anambra, was allegedly robbed and then beaten by some South Africans at Oliven, Centurion on Monday (Nov. 13).

The said the police came and took him away to his house for a search.

“The victim pleaded with the police to take him to the hospital for treatment but they refused.

“ After searching his house without finding anything, he died as a result of the severe beating’’.

As usual, the Nigerian community in the area which expressed worry about the incidents, had vowed to take up the matter with “appropriate authorities’’, the source added.

Dabiri-Erewa, while reacting to the gruesome killing of a Nigerian, Tochukwu Nnadi, by police in South Africa which has brought the number of Nigerians massacred in the country to 20 in 2016 alone, had described it as “unacceptable to the people and government of Nigeria’’.

“The barbaric behaviour of the perpetrators is not only unacceptable, but also calls for urgent attention by diplomatic authorities in Nigeria and South Africa,” she said, reiterating President Muhammadu Buhari’s call to Nigerians to avoid crimes such as drug peddling which attracts stiff penalties, sometimes death.

Dabiri-Erewa urged the South African government to ensure that justice prevailed by carrying out investigation and bring the culprit to book.

NAN also reports that On Oct.11, Mr Jelili Omoyele, a 35-year-old cellular phone technician, was allegedly shot dead in Johannesburg while Olamilekan Badmus, a 25-year-old from Ogun, was also killed at Vaal Vreneging, near Johannesburg.

On the same day, a third Nigerian identified as Ifeanyi, a chicken seller, was accidentally shot in the head by the police.

Apart from the statue, a road was also named after Zuma with a traditional title of Ochiagha Imo by Eze Imo, Samuel Ohiri, to crown the state honour bestowed on him.