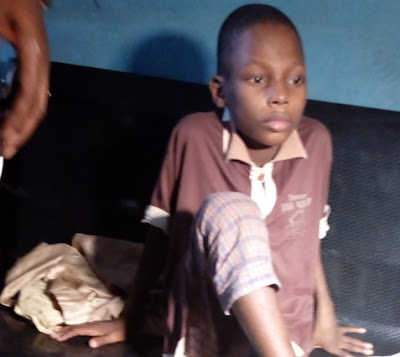 Grandma Chains Grandson With Padlock In Obada, Ewekoro Ogun State To Prevent Him From Fleeing Home

A young boy was today rescued in Ewekoro LGA of Ogun State over 2 months after his grandma chained him with the permission of his mother in order to prevent him from fleeing.

The victim, 12-year-old Segun Azeez is the son of an auxiliary nurse, Yomi Kazeem.

When Yomi Kazeem broke up with the father of her son, she took him to her mother (victim’s grandma) in Ife-Lagba area of Obada town in Ogun state where she gave her mother, Mrs Yemi Kazeem(victim’s grandma) the permission to lock him up with chain and padlock.

She reportedly provided the tools used in locking the child to a spot at the bland bungalow where FSARS and policemen freed him today. 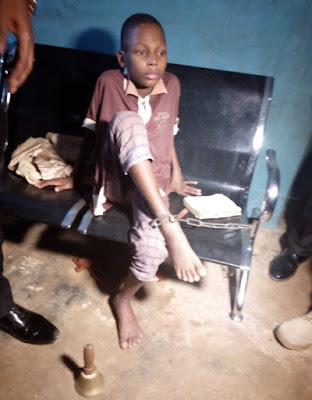 After regaining his freedom, Segun Azeez broke down in tears.

He alleged that he fled from his father’s home in Sagamu after someone cast a spell on him.

In her confession, his grandma, Yemi Kazeem said he chained the boy to deliver him from the spiritual forces compelling him to flee home. 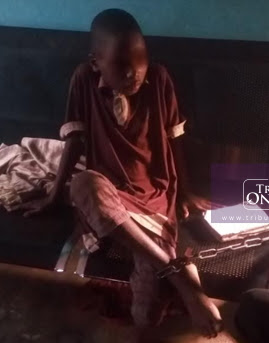 The victim’s mother, Yomi Kazeem on the other hand said she approved locking him up to save his grandma the stress of searching for him should he flee home.