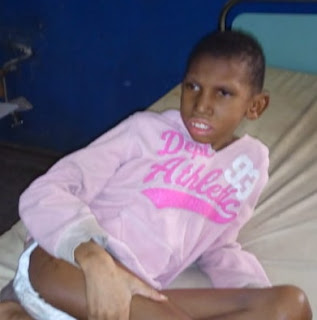 A physically challenged boy is now fighting for himself after his mother abandoned him at the Warri Central Hospital in Warri Delta state.

Meet 14-year-old Steven Orode. His mother took him to the aforementioned hospital on Tuesday the 12th of December 2017 because of Malaria.

She reportedly left the boy there when doctors diagnosed him with acute malaria and Cerebral Palsy.

All efforts by the hospital to get in touch with the run-away mother failed.

The hospital later took to the boy to an orphanage in Warri where he was rejected on the ground that he is physically challenged.

His case has been assigned to the Social Welfare Unit of Delta State Police Command in Warri.