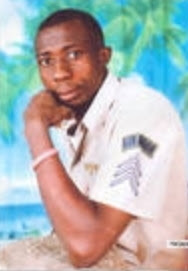 January 4, 2018 – Technician Stabs Friend On Buttock On New Year’s Day For Demanding Beer From Him At Lekki Lagos Beer Parlour

Police in Maroko, Lekki Lagos have arrested a man for allegedly stabbing his friend on New Year day.

The suspect identified as Ozoemena Osigwe alleged stabbed his friend, Samuel Emmanuel in his buttock for demanding a bottle of beer from him at a drinking joint at their ghetto residence in Marwa area of Lekki Lagos on New Year day.

According to police report, Emmanuel ordered Osigwe to buy him a bottle of beer to celebrate the New Year but the accused warned the victim to stop bothering him because he’s broke.

The argument soon led into a fight and as the victim broke a bottle of beer and threatened to stab Ozoemena, he ran to a nearby kitchen to pick a kitchen knife which he used to stab him on the buttock.

Samuel Emmanuel is currently clinging to life at the hospital as the accused is remanded in Ikoyi Prison over his inability to perfect his bail condition (N200,000 with two sureties in like sum).