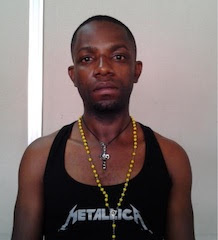 Francis Bawaba, a Spain-based Nigerian has been arrested at the Murtala Muhammed Airport in Lagos with 6.49 kilogrammes of cocaine, Nigeria’s anti-drug trafficking agency said on Monday.

“Attempt by a Nigerian living in Madrid, Spain, to earn N3.3 million (by) smuggling 6.490kg of high-grade Brazilian cocaine has been nipped in the bud by anti-narcotic officials,” said Mitchell Ofoyeju, spokesperson for the Nigerian Drug Law Enforcement Agency, NDLEA.

Ofoyeju said the arrest of 32 year-old Francis Bawaba and the seizure of the drug were made at the weekend by NDLEA officers at the Murtala Muhammed international airport in Lagos, Southwest Nigeria.

The 364 wraps of cocaine, valued at N72 million, were prepared for ingestion and hidden inside his hand luggage, Ofoyeju said.

“Officials detected the drug during the inward screening of passengers on an Etihad flight.

NDLEA Commander at the Lagos Airport, Mr. Hamza Umar was quoted as saying: “Our investigation has revealed that the suspect took off from Malpensa, Milan and collected the drug while on transit at Abudabi. He had given us very useful information that we are already working on.”

NDLEA quoted the suspect as saying that his concern was how his pregnant wife and two children could cope in his absence.

“This is my first time of smuggling drugs and I was lured with an offer of N3.3 million. I used to work in construction sites in Madrid to earn a living but it has been difficult securing a job since the global economic melt-down,” NDLEA quoted the suspect as saying.