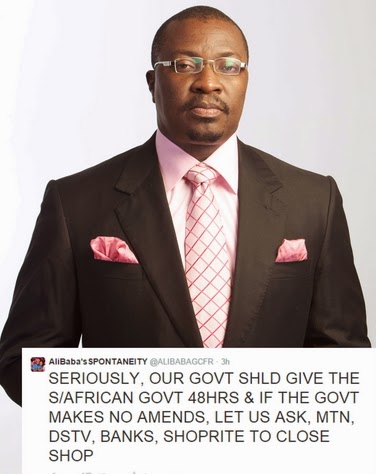 Xenophobia has a long history in South Africa and the recent violence has brought back a lot of memories with the underlying message that some (not all) South Africans have deep-rooted hatred for their fellow black people.

Nigerian comedian Ali Baba recently went down the memory lane to pick an encounter with some South Africans during his vacation period back in 2006.

Read his story below:

“In 2006, my wife and I were in South Africa for a holiday. It became so cold I told her I needed to get some groceries. And by that I meant I needed, Milo, Ovaltine, Bournvita… Any chocolate drink, to make some hot brew. I also wanted to dunk bread. Yes I dunk my bread inside my cup of hot chocolate… Go call police! Mscheeeew!

Luckily, there was a super-mart a few blocks from the hotel. After looking around and getting what I wanted and more, I got to the cash point, ready to pay and noticed there were 3 SouthAfrican black guys ahead of me and a white guy ahead of them. So, I was waiting in line. Then the most shocking thing happened.

The white guy finished with the cashier and moved out. To my surprise, some white guys who had been standing by an aisle closest to the cash point, stepped up and joined the queue ahead of the black guys.
My blood hot!!!!

“Hello sir, would you mind joining the queue?”
And before the white man could reply, the black guys started to talk to me that we should allow him.
I refused. I told them if they did not want to check out… I was. So I went on to do my stuff. And even paid for all the black guys. The white guy was feeling too proud to let me pay for his stuff…

You could see that the full grown 50kva South African men were scared stiff of the white men… And don’t tell me they were being hospitable!”.

We have never seen a country with such hatred for their fellow blacks.

It is a big slap on the faces of good South Africans as the whole world now see all of them as killers.

Hope Zuma will make the right decision by ordering the arrest of anyone caught killing foreigners or inciting violence.