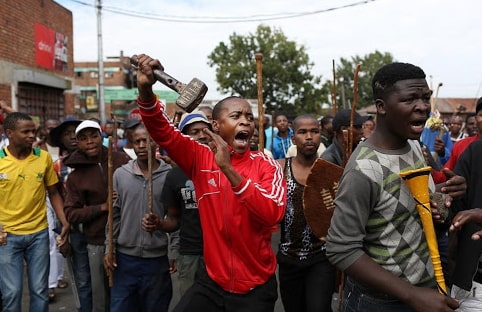 Why Do Some South Africans Fear Foreigners?

But if xenophobia is the fear or hatred of foreigners or strangers, which is what it is, then the next logical question is: Why do some (certainly not all) South Africans fear or hate foreigners, including Nigerians, in their country? It certainly is necessary to go beyond the attacks resulting from xenophobic feeling in order to unearth the very reasons behind such feeling.

However, in order to understand the motive behind xenophobia in South Africa today, we must first ask: Who exactly are the xenophobes and why are they attacking foreigners? What exactly is their motive?

There are three main groups of participants in the attacks. One group consists of gangs whose members depend on stolen goods and drugs for survival. Drug dealers-South Africans and foreigners, including some Nigerians-are their suppliers. A number of the drug dealers have legitimate shops used to mask their drug dealing business. Such shops are often included as targets of attack.

The second group consists of bandits and miscreants, who look for any opportunity to loot shops and businesses. All they need is a slight disagreement between a local and a foreigner. Bingo, foreigners, who own businesses or shops in the area become targets of attack. Once a critical mass of such attackers takes over the area, the police become helpless.

The third group of attackers consists of unemployed youths and disgruntled workers on low wages or those who lost their jobs. This group believes, rightly or wrongly, that they are being displaced by foreigners, whose immigration to South Africa increased after the end of apartheid in 1994.

A year before this poll was taken, an officially sanctioned anti-immigrant protest took place in Pretoria. A petition was handed to officials of the Foreign Ministry in which immigrants were accused of taking jobs and causing crime.

Let us now go beyond the attackers to further explore the main reasons behind their actions. They are mainly socio-economic issues. In the forefront is a combination of soaring unemployment, low wages, and job losses, which are blamed on foreigners, as the first poll figure above shows.

There are also drug dealers and fraudsters among them. These are the Nigerians who spend lavishly on women, causing some South African men to be jealous of Nigerian men. It is as yet unclear whether such jealousy featured in the attacks.

A direct result of high unemployment is abject poverty, which is also high in South Africa. Poor South Africans cannot but be angry at Nigerians, when they see them on jobs they, too, could do. Poor people everywhere look for opportunities to make quick money and get food. Looting offers such an opportunity, which makes the urban poor ready accomplices in such crimes.

Social inequalities easily get accentuated by high unemployment rates. Corruption, especially the phenomenon described as “state capture”, under former President, Jacob Zuma, could only worsen matters. The poor, the unemployed, and gang members often seize any opportunity they find to vent their anger at the economic situation that puts them at a disadvantage. A slight scuffle with a foreigner or two offers such an opportunity. Such was the case with the death of a taxi driver on September 1, 2019, which sparked the series of riots and looting this month.

South African officials have not helped matters, either. For one thing, there seems to be no agreement as to the characterisation of the attacks. While President Cyril Ramaphosa sees them as xenophobic attacks, the Police Minister and the Police Chief see sheer criminality, pointing to the wanton looting accompanying the attacks. The press, of course, is focused on xenophobia as are many world leaders, who rely on press reports.

Ramaphosa himself has been blamed for contributing to xenophobic feeling, by indicating in a campaign speech in the May 2019 general election that he was committed to cracking down on undocumented foreigners involved in criminal activity.

Besides, South African officials have missed numerous opportunities to stop the attacks and protect foreigners in their country. Discrimination against immigrants has a long history in South Africa. So do attacks on foreigners, which actually intensified as immigrants increased in population after majority rule in 1994. Between 2000 and 2008, at least 67 people died in such attacks. Indeed, in May 2008 alone, 62 people died in a series of attacks, including 21 South African citizens.

Between 2008 and 2019, multiple attacks have taken place in different cities in South Africa, involving immigrants from various countries, including Nigeria, Somalia, Zimbabwe, Ethiopia, Mozambique, Pakistan and Bangladesh. True, some attackers were arrested but nothing else has been heard about them. The belief is that they were gradually eased out by the authorities, implying the government’s complicity.

The Nigerian government was quick in stopping reprisal attacks on South African establishments in Nigeria. The government’s reaction to the attacks on Nigerians in South Africa over the years will be reviewed next week.

Baby Rattlesnake With Two Heads Found In New Jersey
Revend Biodun Fatoyinbo: A Chronic Womaniser Or A Biblical Samson Who Fell Into Adultery