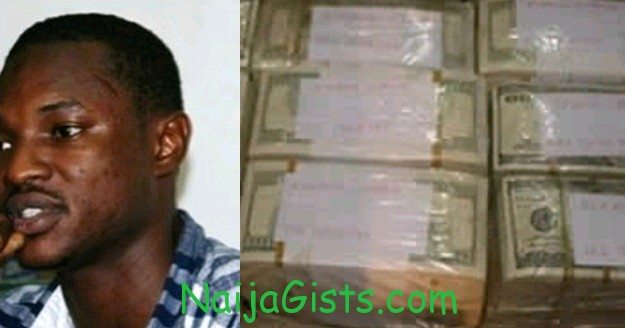 EFCC on Wednesday arrested a currency courier identified as Abubakar Tijani Sheriff as he attempted to smuggle $7.5 million out of Nigeria. naijagists.com

He declared he had $4.5m on him at the time of his arrest but after a thorough search, he was found in the possession of $7.5 million.

He later confessed he was a currency courier for twenty people who employed him to courier the money to Dubai for them.

“Investigations by the EFCC showed that Sheriff is a regular
traveller and one of several couriers of illegal cash suspected to be
proceeds of crime,” the commission adding that his claims concerning his accomplices are being investigated.

Travellers leaving the country are statutorily required to declare
cash in excess of $10,000. However, under the provisions of the Money
Laundering Act, it is not sufficient to declare excess cash; the onus is
on the person making the declaration to explain the source of the
excess cash and the reason for the export.

In a country where thousands are going hungry some people are busy smuggling dollars not naira o.

Qatar Airline Flight Makes Emergency Landing In Lagos, No Injuries Reported
I’m Disappointed Because Men Are Not Asking Me Out, They’re Afraid Of Me – BBA Karen Igho Laments