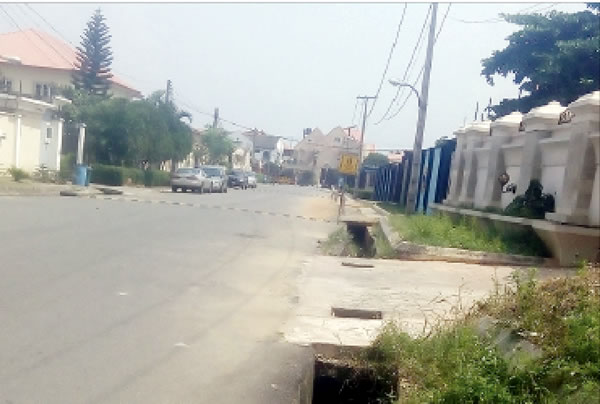 We learnt that Babalola, popularly called Junior, had been living with his parents on Ibitayo Street, Magodo, Shangisha, after returning from the UK.

His parents reportedly got him an apartment in the Ketu, Ikosi area, where he relocated to.

However, the suspect reportedly paid a visit to his parents on Saturday and stayed over till Sunday. He reportedly attacked them after a disagreement.

A security guard on the estate explained that Junior left his mother for dead.

He said, “Most of the security guards on the estate were not around and many residents had gone to church. By the time we returned, we heard a noise from the woman’s room as she cried out for help.

“We rushed there and met her in a pool of blood. She had been stabbed in the cheek and even in the eye area. There was a lot of blood in the house. We took her to the emergency centre in the Ojota area.”

Another source on the estate said the suspect had arrived in the house on Saturday.

He said, “The man just returned from the United Kingdom and we observed that he was always alone. He was living with his parents until recently when they got him an apartment in Ikosi, Ketu.

“But on Saturday, he came to pay them a visit and he slept over. He had an argument with the father that morning and he stabbed him to death. When the mother tried to intervene, he also stabbed her.

“Afterwards, he left the house. However, some minutes later, he returned to check if they were completely dead. He then shut the door against them before fleeing the area.”

Our correspondent learnt that the security guard in the house did not suspect anything until Adijat started screaming for help.

It was gathered that the guard would have been arrested and detained, but for the testimony of the woman, who before passing out, told the police that her son committed the crime.

The police spokesperson, Badmos, said the police were trailing the suspect, adding that the case had been transferred to the State Criminal Investigation and Intelligence Department, Yaba.