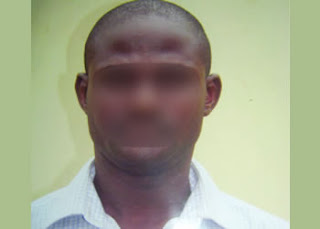 A medical doctor, Dr. David Moroundiya, 42, has been arrested by the operatives of the Special Fraud Unit, SFU, at Milverton Street, Ikoyi Lagos, southwest Nigeria, for allegedly obtaining the sum of N11 million from a surveyor, Abiodun Esan under false pretence.

The doctor was arraigned before an Igbosere Magistrates’ Court, Lagos on a two-count charge of felony to wit, stealing and issuance of dud cheques.

The police prosecutor alleged that the accused, a resident of 9 Adenuga Street, Surulere Lagos was arrested following a complaint lodged by the surveyor that the accused in January 2011 approached him and said he had a family land to sell to him at 33, Kayode Street, Ogba, Ikeja at the sum of N11 million.

The surveyor said he believed the accused and paid him the money after he identified himself as the son of the late owner of the land and also a medical doctor who has practiced in Osun State, Osogbo for several years.

Esan stated that as he was about to take possession of the land, someone surfaced and claimed that he had earlier bought the land from the late owner of the land and had the necessary documents.

The complainant said that Moroundiya later took him to another land to take possession, but he met a brickwall as the said land did not belong to the accused.

Esan alleged that the accused later issued him a First Bank of Nigeria cheque for N11million on the pretence of paying back the money but when he presented it to the bank, the cheque was dishonoured on the ground that there was no fund in the account.

He added that when all efforts to recover his money from the accused proved abortive, he reported the matter to the police.

The offence, the prosecutor Supol Emerho Frank, said contravened Section 419 of the Criminal Code and contrary to and punishable under the Dishonoured Cheque Act Section 1 of Criminal Code Cap D11 Vol 11, LFN 2004.

The accused pleaded not guilty to the charge and Magistrate C. J. Momodu admitted him on bail in the sum of N1million with one surety in like sum.

The magistrate adjourned the matter till 18 June for mention.

The defendant was transferred to Ikoyi Prison in Lagos pending when he would fulfill the bail conditions.