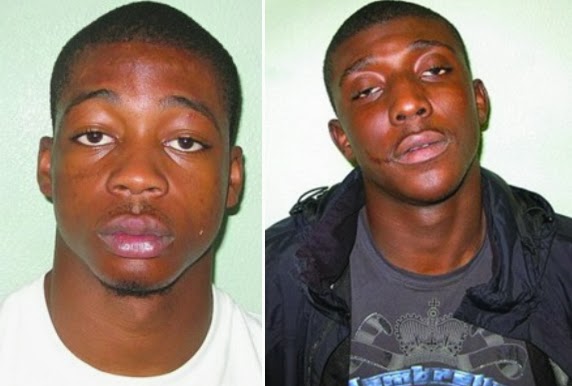 2 Nigerian boys who are members of a deadly drug gang in the UK have been jailed by a court in west London for attempted murder. The two gangsters, Kayode Oshin, 21 and Junior Tahir Akindele, 19 were jailed 22 and 14 years, respectively, yesterday.

The police accused the duo of attempting to murder Yassin Zouaiou with a machine gun (Mac 10) in a feud over drugs and money in Hounslow, west London.

Oshin, the court heard, later uploaded a rap video onto YouTube boasting about trying to murder a rival with a “spray and pray” machine gun.

Mr. Zouaiou survived when the gun jammed, but a single bullet was fired, hitting his brother Mohammed Ali Subhani in the neck.

The shooting was carried out in an alleyway between North Drive and Kingsley Road, Hounslow, at around 1a.m. on 6 October, 2011, the court heard.

Oshin and a second man, Junior Tahir-Akinyele, 19, were arrested the next day in a white Mercedes-Benz they had hired for the attack.

Jailing Oshin for 22 years and Tahir-Akinyele for 14 years, Judge Timothy Pontius said the pair had been “enticed into a world of gang culture and crime.”

“Oshin, you are convicted of attempted murder, your clear intention was that Yassin Zouaiou should die,” he added.

“That intention would undoubtedly have been realised were it not for the fact that the mechanism on the gun jammed, releasing only one round.

“It’s a matter of good fortune that he was not killed in what would have been a spray of bullets had the weapon been in good working order.

“The Mac 10 was obtained by you with a specific murder in mind.

“Tahir-Akinyele, you are convicted of wounding with intent to do grievous bodily harm.

“It was your intention to hurt Mohammed Ali Subhani very badly, an intention that was fulfilled to the extent that really serious injury was caused.

“You readily and willingly played your part in obtaining the Mac 10.”

“Both of you have a record for serious violence,” Judge Pontius said.

“I have no doubt that the public must be protected from serious harm at your hands.

“You are both currently serving substantial sentences for the offence in November 2011.”

Oshin was jailed for 22 years for attempted murder; 16 years imprisonment for possession of a firearm with intent to endanger life and 14 years for wounding with intent, all to run concurrent.

Tahir-Akinyele was sentenced to 14 years in a Young Offenders’ Institution for possession of firearms with intent to endanger life with 12 years concurrent for wounding with intent.

Detective Constable Iain Bailey, of the Trident Gang Crime Command, said: “These violent offenders, who were involved in a gang and drug dispute, resorted to firearms to settle their arguments.

“They were then brazen enough to brag about their offence on the internet. Thanks to the work of the Trident Gang Crime Command, with the assistance of Hounslow officers, we were able to gather the necessary evidence to bring about this conviction and prevent further offences.”