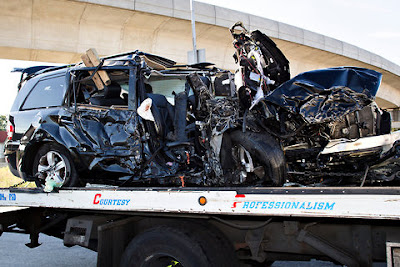 Nigerian family of 5 which includes 2 children were all killed in a fatal car crash which happened on Sunday July 22, 2012 near the Van Wyck expressway in Queens, New York at around 3:15 am in the morning.

Before the fatal crash, we learnt the driver of the van and the seven passengers left a nearby banquet hall where an association of Nigerian immigrants had gathered from across the United States for a celebration that featured dancing and discussions about improvement projects they were sponsoring in their homeland.

“Did God go to sleep on us?” a participant in Saturday night’s festivities, Inno Chima, said Sunday as he stood on the sidewalk outside the hospital.

As of late Sunday afternoon, the police had not released the identities of the victims, but among them were an 8-year-old girl and a 9-year-old boy.

Police believe the S.U.V. was speeding, the authorities said. Witnesses have told investigators that the vehicle ran two red lights shortly before the accident, which occurred on Atlantic Avenue just east of the Van Wyck.

The vehicle struck a concrete support for the AirTrain to Kennedy International Airport, and flipped a number of times before coming to rest on the passenger side about 80 feet away, the authorities said.

Then it ignited in flames. (New York Times)