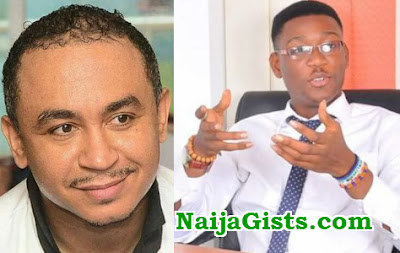 October 26, 2017 – Nigerian Floors Daddy Freeze In Explosive Letter, Calls Him A Marriage Drop Out For Insulting His Babymama

Dear Daddy freeze,get a life. After you’ve done that, get another one!

There are people who will hold their breaths if common sense is the air we breath.

There are people who will rather be obese if wisdom was lean.

There are people who wish everybody’s life will play out like theirs.

There are people like Daddy Freeze who walk around the streets of social media with a water gun engaging everybody in a fight.

As laughable as it is, it is daunting. That a man as old as anything you can think of will stop at every barking dog and throw stones. It is a case of sheer joblessness. A joblessness with a tag. OAP –

I have watched him from a distance because he who eats with the devil is instructed to use long spoons. I have seen him fight dirty, silly and funny. I have.

At some, I shake my head, at some, I google “How to unread IQ dropping articles” , at some, I laugh. Real hard.

Yesterday’s was different. Very different. He as usual walked down the street of social media with his mannequin looking face and stopped at Timi Dakolo junction. His legs were dirty from the long trek and he had nothing to help himself with. Frustrations came in.

Next, he attacked Timi.

I went to the post and disagreed with his disagreement with Timi Dakolo and all the bald-headed block head could do was to block me from his instagram.

You’re a breathing and walking fridge. All you do is block people who disagree with you!

When will you block your self from being silly?? Just when??

Listen Freeze!! You’re a culprit of stark stupidity and ignorance. Your self esteem is a definition of groveling.

Go to the market and get a life. After you’ve gotten one, get again because you will definitely lose the first one you got!

You don’t know what hierarchy means??

You gatecrash into a party Timi threw on his wall with your dirty legs and smelly armpits?? Only to engage in baseless arguments.

You should register for tutorials.

Sit down! Be humble!

Because you failed in your marriage doesn’t mean everybody will fail.

You are an overbearing thing!!
You are a chicken!!.

After ten years of marriage, you chickened out from that institution!

Later, you insulted the mother of your kids.

The woman you once begged for sex. You later came on the internet to insult her.

So much for being an OAP.

Focus on your life!!!

Your focus in life is to focus on the lives of happy people just to steal their happiness.

I am busy right now.

I await your reply.

Because all you do is throw stones at barking dogs.

—
Mark Anthony is a writer and social critic who lives for moments like this.
He can be reached via markanthonyfoundation(at)gmail(dot)com