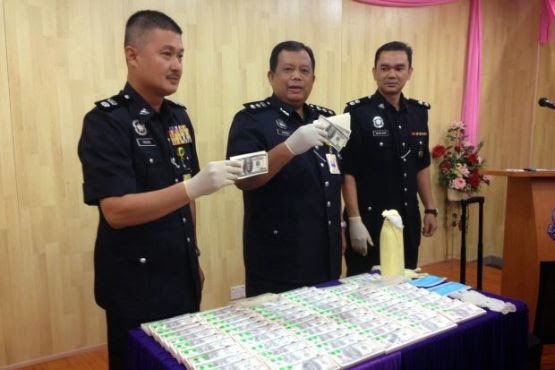 A 46-year-old woman was shocked when her Caucasian boyfriend, who she fell in love with on the Internet, turned out to be a Nigerian.

On Saturday, the teacher met the 36-year-old Nigerian at a hotel in Jalan Tun Perak for the first time because he wanted to repay the RM130,000 that she had lent him.

“When she checked the notes, she knew that something was wrong so she called us,” said Dang Wangi OCPD Asst Comm Zainol Samah in a press conference.

ACP Zainol said the woman met the Nigerian two months ago on the Internet and they began “dating”.

“The man pretended to be a Caucasian when they met on Facebook.

“After a while, he told the victim that he was financially constrained and that he needed her to help him,” he said.

The woman wired RM130,000 into a local account as the man promised to pay double the amount and in American currency.

Five minutes after receiving the woman’s call, police rushed to the scene and the victim informed them that she had received a briefcase containing cash, which she believed was fake.

When asked how she got the briefcase, she pointed at the man.

“So we checked and found that the ‘cash’ was fake. He was immediately arrested and brought to the district headquarters,” ACP Zainol said.

Police then detained the Nigerian, who entered the country a week ago, at about 2.05pm.

The suspect is being remanded until tomorrow.

The case is being investigated under Section 489C of the Penal Code for possession of fake money.