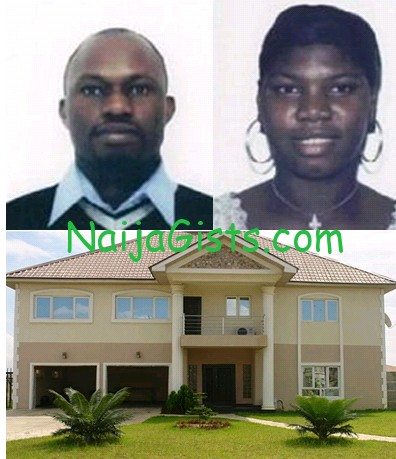 A Nigerian man, Ovo Mayomi and his wife Juliet Ubiribo were convicted of fraud in 2010 after using an identity and immigration scam to falsely claim £43,000 in benefits. Mayomi, 44, claimed he was earning £700 a month and was living in Croydon, south London, while his wife, 32, claimed benefits after telling benefit bosses she was a single mother and a victim of domestic violence.

But fraud investigators found Mayomi and his wife were actually living in a large luxurious house in Lekki near the Nigerian capital Lagos worth more than £1million complete with chandeliers and £89,000 worth of sound equipment. He also had a £25,000 watch. His wife wore a Rolex watch and drove a Mercedes Sport Coupi.

Now a judge has ordered Mayomi to pay £1,197,743.54 in a confiscation order under the Proceeds Of Crime Act, or go to prison for six years.

As well as two money-transferring businesses and bank accounts, investigators also discovered Mayomi owned a fish farm in the country.

The couple’s benefit scam unravelled when a visa application by Mayomi showed they had married a year earlier and that Ubiribo had a job in order to support him.

Ubiribo also asked the council to rehouse her because she was the victim of domestic violence.

However, the telephone number she gave revealed the man she named as her landlord – Ayiomike Neburagho – was, in fact, her husband Mayomi using a false identity.

At a police interview, Mayomi admitted that while living in Nigeria he had bought the identity of Ayiomike Matthew Neburagho and had entered the UK as him.

Mayomi was also shown a wedding photograph of himself, using the Neburagho identity, marrying a Nigerian woman in the UK.

He admitted he was the groom in the wedding photo but he said he was ‘just standing in for someone’.

Ubiribo and Mayomi pleaded guilty to all charges.

Mayomi was jailed for 30 months two years ago and his wife was sentenced to 12 months in prison, suspended for two years.

She was also ordered to carry out 200 hours of community service and be under curfew for four months from 9pm to 6am.

Court orders were signed freezing their assets in the UK and abroad in 2010, and an investigation was launched to find out how much the Nigerian-born couple had gained from their criminal lifestyle and what the extent of their assets was.

Mayomi, of Ashburton, disputed the results of the assets investigation, and a subsequent four-day confiscation hearing took place at Croydon Crown Court.

On Friday, Judge Nicholas Ainley ruled that Mayomi must pay £1,197,743.54 by 14 March next year. It is one of the largest confiscation orders carried out by a council.

Failure to do so will see him sent to prison for six years, during which time interest will accumulate on his debt, which will remain due following his release.

At a hearing in July, a confiscation order was made against Ubiribo for £9,357.42 to be paid by 19 October or face five months in prison.
Investigators had discovered she was the owner of a Rolex watch and a Mercedes Sport Coupi.

Councillor Dudley Mead, deputy leader of the council, said: ‘This is a landmark case for Croydon as it is the first time the council’s in-house financial investigator has pursued a major confiscation order of this nature.

‘Usually these cases are dealt with by the police rather than local authorities. It is rare for councils to have their own in-house investigator, so it is to the anti-fraud team’s immense credit that it is pioneering the way forward in reclaiming the proceeds of crime.

‘As a result of our investigator’s fine work, the council expects to be able to claw back as much as £400,000 in taxpayers’ money.

‘This case should serve as a clear warning that crime does not pay. Croydon Council will always prosecute in fraud cases and seek to recover money or assets wherever they are.

‘This is to protect decent taxpayers from having to pay more.’ (UK Mail)